Veteran James Blake and upcoming players Milos Raonic of Canada and American Coco Vandeweghe are among those players granted wild cards into the main draws of the BNP Paribas Open. 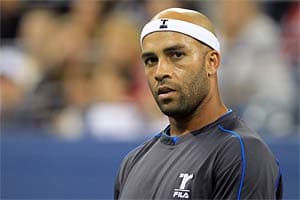 Veteran James Blake and upcoming players Milos Raonic of Canada and American Coco Vandeweghe are among those players granted wild cards into the main draws of the BNP Paribas Open.

The tournament will be played March 7-20 in Indian Wells features both the ATP and WTA tours.

Blake, a finalist in 2006, battled injuries throughout last year, but has regained his health. Raonic advanced through qualifying to make the main draw at the Australian Open in January and reached the fourth round. He won his first ATP title recently in San Jose and then made the finals in Memphis the following week.

Kei Nishikori of Japan, American Ryan Harrison, and Australian Bernard Tomic were the other men to receive wild cards.

Vandeweghe, who played on the U.S. Fed Cup team in November, along with fellow Americans Christian McHale, Lauren Davis and Sloane Stephens received wild cards on the women's side. Also earning wild cards were Americans Vania King and Jill Craybas, and Sania Mirza of India.

Mark Philippoussis of Australia, the 1999 champion, received a wild card into the men's qualifying as he attempts a comeback.

Comments
Topics mentioned in this article
Tennis James Blake Fernando Verdasco Milos Raonic Rafael Nadal Coco Vandeweghe
Get the latest updates on ICC T20 Worldcup 2022 and CWG 2022 check out the Schedule, Live Score and Medals Tally. Like us on Facebook or follow us on Twitter for more sports updates. You can also download the NDTV Cricket app for Android or iOS.