Bernard Tomic to play for first title against Anderson

Tomic bids to become the first Australian winner of Sydney International since Lleyton Hewitt in 2005. 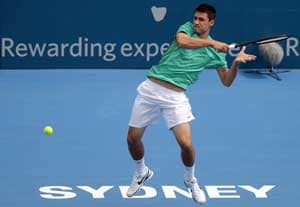 Australian youngster Bernard Tomic reached his first Tour final with a 7-6 (12/10), 6-4 win over Italian Andreas Seppi at the Sydney International in sweltering heat on Friday.

The 20-year-old will face giant South African serve-volleyer Kevin Anderson in Saturday's final, as he bids to become the first Australian winner of the event since Lleyton Hewitt in 2005.

Tomic struggled in the heat during the tough first set against the third-seeded Seppi and called for the trainer at 6-5 complaining of dizziness.

But the match swung the Australian's way in a titanic 22-point tiebreaker with Tomic winning on his third set point after fighting off four set points from Seppi.

He broke serve in the ninth game of the second set with a fortuitous net cord on break point and powered through his service to take the match in one hour 24 minutes.

Tomic, who came into the tournament ranked 64, moved up to 49 by making the final and should he win Saturday's decider his ranking will improve to 43 ahead of next week's Australian Open in Melbourne.

Anderson went one better than Wayne Ferreira, who was the last South African to play in a Sydney semi-final against Carlos Moya in 2004.

"This tournament has been going on for a while. There have been some very good South Africans in the past," Anderson said.

"Most notably Wayne Ferreira. So, yeah, hopefully I'll be able to take it one step further tomorrow."

Anderson was down match point on his service in the 12th game of the third set but saved it with a terrific second service ace -- one of 18 for the match -- and then held with a crosscourt backhand to take the set into a tiebreaker.

Benneteau, playing in the Sydney semis for the third time in four years, faced a match point at 6-5 in the tiebreaker before he had a second match point at 7-6, only to shank a forehand off his racquet and waste the chance.

Anderson brought up his second match point with an ace but failed to capitalise. He had more luck with his third at 9-8 putting away a crosscourt winner at the net.

It was his first win in three meetings with the 35th-ranked Benneteau and puts him in line to go after his third career ATP title after wins at Delray Beach last year and Johannesburg in 2011.

Comments
Topics mentioned in this article
Tennis Lleyton Hewitt Kevin Anderson Bernard Tomic
Get the latest updates on ICC T20 Worldcup 2022 and CWG 2022 check out the Schedule, Live Score and Medals Tally. Like us on Facebook or follow us on Twitter for more sports updates. You can also download the NDTV Cricket app for Android or iOS.