Bartoli cruises through to the final

France's Marion Bartoli snapped a string of seven semifinal losses by beating Yanina Wickmayer to reach the final of the WTA and ATP Indian Wells tournament on Friday. 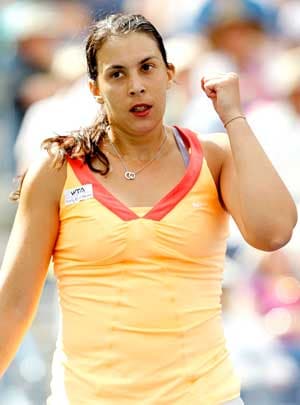 France's Marion Bartoli snapped a string of seven semifinal losses by beating Yanina Wickmayer to reach the final of the WTA and ATP Indian Wells tournament on Friday.

Bartoli, who was seeded 15th, hammered 10 aces to defeat the Belgian 6-1, 6-3 in a semifinal match at the hardcourt event.

"I am so happy to be in the final because Indian Wells is one of my favorite tournaments. I played great even though I got tense on my serve in the second set," Bartoli said.

The 26-year-old Bartoli advances to the final, where she will meet either top seed Caroline Wozniacki of Denmark or Maria Sharapova of Russia, who are scheduled to take the court in the night session.

"I will be the underdog going into the final, and I will have absolutely nothing to lose," Bartoli said.

She won four consecutive points in the deciding game of the second set after losing the opening three. She started off her mini-rally with an ace to make it 40-15 then clinched it with a backhand down the line.

"The first set I start to serve extremely well. I was really acing her a lot," Bartoli said. "The second set my first serve dropped, but I was able to stay very consistent in the rallies and not give her too many free points.

"I was able to come up with some great passing shots and some great lobs.

"I think the most satisfying part was I was able to stay really focused and not showing too many bad emotions in the court and really stay positive towards the end."

This was her third semifinal this year after Brisbane and Doha but her first final since 2009. Her last win on the WTA Tour was in 2009 in Stanford.

She is the first Frenchwoman to reach a singles final at Indian Wells and one of only three players aged 26 or older to reach the final, joining Martina Navratilova (1990-91), Steffi Graf (1999) and Lindsay Davenport (2003-05).

Comments
Topics mentioned in this article
Tennis Yanina Wickmayer Marion Bartoli
Get the latest updates on ICC T20 Worldcup 2022 and CWG 2022 check out the Schedule, Live Score and Medals Tally. Like us on Facebook or follow us on Twitter for more sports updates. You can also download the NDTV Cricket app for Android or iOS.