Serena Williams launched her quest for a 24th Grand Slam title with a quickfire demolition of Anastasia Potapova at the Australian Open. 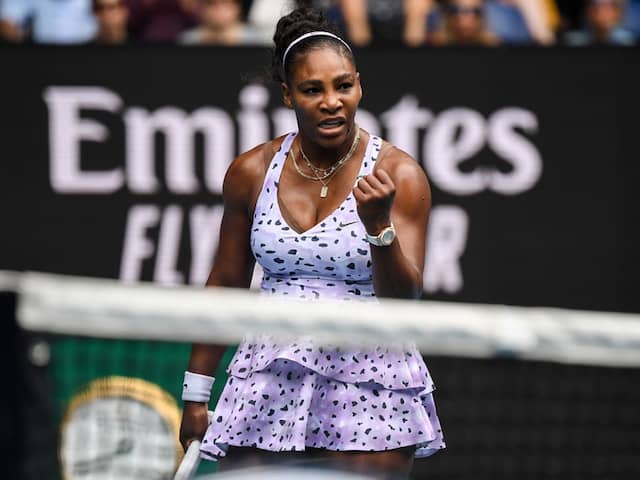 Serena Williams powered past the Russian teenager 6-0, 6-3 in 58 minutes.© AFP

Serena Williams blitzed the first set in 19 minutes as she launched her quest for a 24th Grand Slam title with a quickfire demolition of Anastasia Potapova at the Australian Open on Monday. The 38-year-old American, wearing a lilac dress and matching trainers, and sporting heavily decorated fingernails, powered past the Russian teenager 6-0, 6-3 in 58 minutes. The eighth seed plays Tamara Zidansek of Slovenia or Han Na-lae of South Korea in round two in an expectant Melbourne, where she can equal the all-time record of Grand Slam titles.

Williams comes into Melbourne in ominous form after breaking her three-year title drought with victory in Auckland -- her first since becoming a mother to daughter Olympia.

Olympia was there to see her mother win the title last week, but Williams said after easing to victory over the 18-year-old Potapova: "It was really special for me (Olympia) and her -- I hope for her."

But the American legend, speaking to an adoring crowd at the 15,000-capacity Rod Laver Arena, admitted that Olympia "just cares about Play-Doh".

Williams threatened to blow away Potapova -- who was temperamental at times -- in embarrassingly rapid fashion.

But the 90th-ranked Russian, overawed in the first set, fought back and broke Williams' serve in the second, helped by some sloppiness from the American.

Williams double-faulted to go down a surprise 2-1, but there was never a hint of an upset as the American broke back before pulling away to an easy win.

There is huge pressure on Williams as she eyes the 24 Grand Slams won by Australia's Margaret Court.

Since winning the title in Melbourne in 2017 she has lost four Slam finals, each time failing to even win a set.

Williams, the highest-earning female in sport, was pregnant with Olympia when she lifted the Melbourne crown three years ago.