Naomi Osaka's win equals her best performance at the Australian Open, where she reached the last 16 in 2018 but lost to Simona Halep. 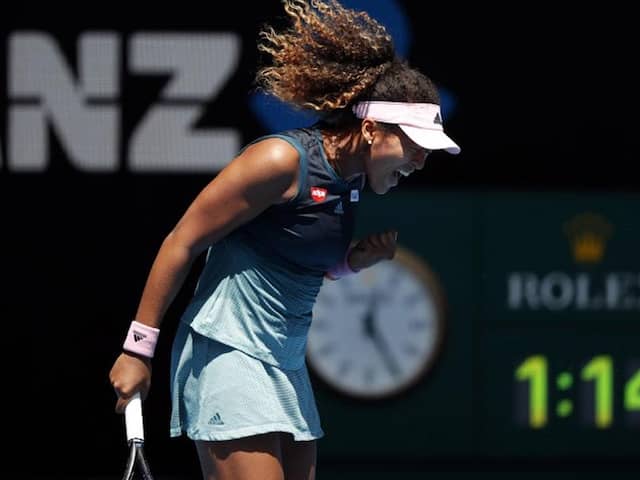 Japan's Naomi Osaka survived a massive scare to reach the Australian Open fourth round Saturday despite an error-strewn display against Taiwanese veteran Hsieh Su-wei. The 21-year-old US Open champion, seeded fourth at Melbourne Park, won the all-Asian clash 7-5, 4-6, 6-1 to set up a last 16 meeting with either Wang Qiang of China or Latvia's Anastasija Sevastova. Osaka's win equals her best performance at the Australian Open, where she reached the last 16 in 2018 but lost to world number one Simona Halep.

But she looked headed for the exit when she conceded the first set and was down 4-1 in the second before she won five straight games to force a decider.

"I just didn't want to give up," said Osaka, who made 42 unforced errors and received a code violation after throwing her racquet in the match.

"I really love Grand Slams so I did anything I could do to stay here a bit longer."

She started well, firing down two aces in her first service game before unleashing a backhand winner that left Hsieh wrong-footed.

But Hsieh pounced as the error-rate crept and the normally softly-spoken Osaka became agitated when she conceded three set points, dropping to her haunches as she tried to regain composure.

She saved one with an ace and managed to run Hsieh around to fend off another but hit a wild forehand over her opponent's head on the third to go down a set.

The second set started badly for Osaka when she conceded an early break and then continued to struggle as Hsieh zipped around the court making stunning returns.

Osaka broke back against the run of play and built momentum with a crucial hold on break point before serving out the set on 42 minutes.

She fell heavily late in the set but shook off any discomfort and proceeded to open the final set with a break after smashing a sizzling cross-court backhand.

She held to go 2-0 up, extending her winning streak to seven games.

Hsieh finally began to tire and the younger player was in control as she closed out the match.