ATP Cup: World number four Daniil Medvedev and eighth-ranked Andrey Rublev have been the two hottest players on tour since last year's US Open, and proved to be pivotal for Russia. 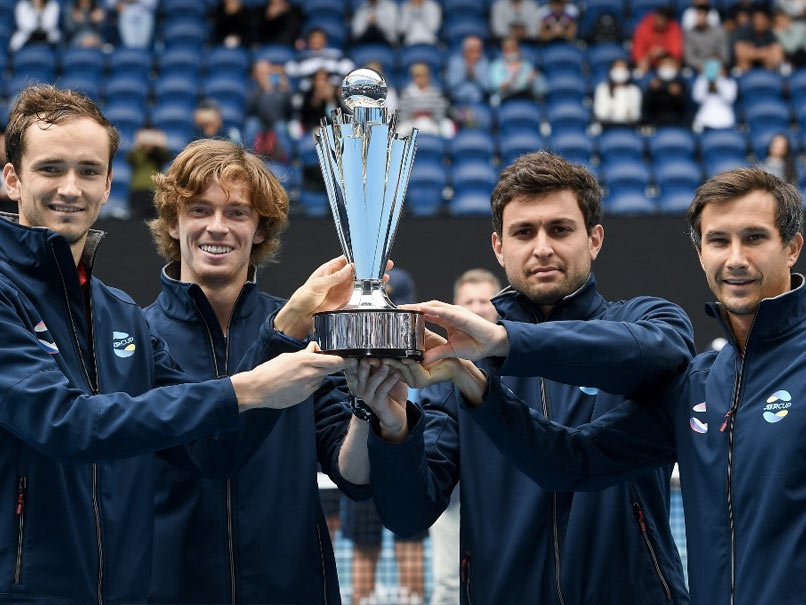 ATP Cup: Team Russia poses with the trophy after winning the final.© AFP

A relentless Russia crushed Italy 2-0 to win their maiden ATP Cup on Sunday with Daniil Medvedev and Andrey Rublev in red-hot form leading into the Australian Open. Russia were the only nation in the 12-team event to boast two top 10 players and they had swept past Japan, Argentina and Germany en route to the decider. Italy faced the same juggernaut on Rod Laver Arena, with Rublev destroying Fabio Fognini 6-1, 6-2 in just 61 minutes before Medvedev overpowered Matteo Berrettini 6-4, 6-2 in 79 minutes.

"Such a pleasure to be part of this team," said Russia captain Evgeny Donskoy. "It's not a tough job to be captain of such a strong team."

World number four Medvedev and eighth-ranked Rublev have been the two hottest players on tour since last year's US Open.

Medvedev is now on a career-long win streak of 14 matches, including his third ATP Masters title in Paris and victory at the season-ending ATP Tour Finals, with 10 of those victories over top 10 opponents.

Rublev has been equally impressive, winning five ATP titles in a breakthrough 2020, more than anyone else, as he raced up the rankings.

He ended his season by beating world number three Dominic Thiem at the ATP Finals and has started 2021 with four straight wins at the ATP Cup, dropping just one set, to make him a contender at the Australian Open.

His sizzling form extended to world number 17 Fognini, who went into the match with a 5-1 record against the Russian but was blown away.

Rublev dominated with his forehand and lost just seven service points in the entire match.

"I was playing really well all week since the first match and I was just going on court thinking that I needed to fight for every ball," said Rublev.

Medvedev faced a tougher assignment against Berrettini, the world number 10 who has also been in prime early season form, winning all his matches before meeting the Russian, including against world number three Dominic Thiem.

The 24-year-olds had only met once before, in 2018, when Medvedev won, and he took an early break in the opening set to go 3-1 ahead, holding on to serve out the set.

It followed a similar pattern in the second set with the machine-like Medvedev raising his game to another level to grind down Berrettini.

Serbia beat Spain in the final of the inaugural and hugely popular tournament last year in Sydney -- launched as a rival to the Davis Cup.

It has been slimmed down from 24 teams to 12 this year due to the coronavirus over five days at Melbourne Park with 7.5 million dollars at stake, rather than the multi-city format employed in 2020.

Comments
Topics mentioned in this article
Daniil Medvedev Tennis
Get the latest updates on India vs South Africa and check out  Schedule, Results and Live Score. Like us on Facebook or follow us on Twitter for more sports updates. You can also download the NDTV Cricket app for Android or iOS.