Virat Kohli, in his first full series as Test captain, led India to a series win in Sri Lanka after 22 years 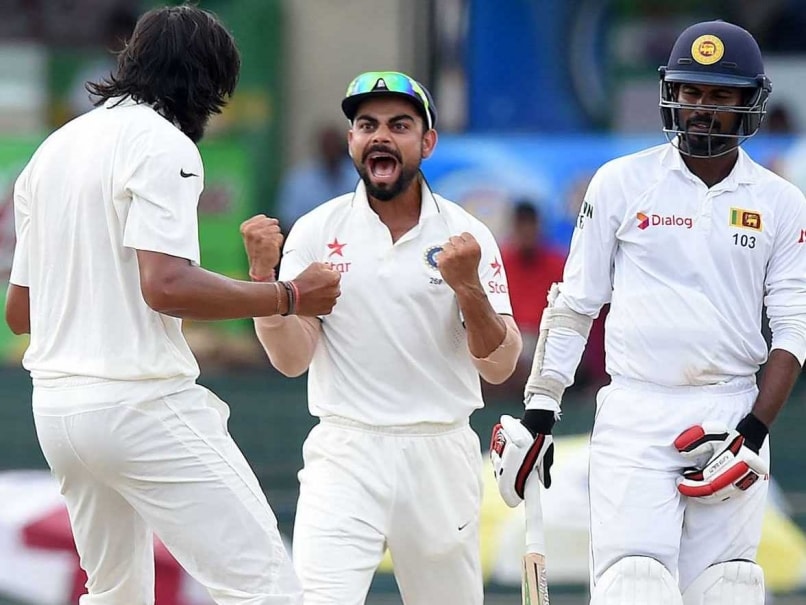 After India completed their first Test series win on Sri Lankan soil for the first time in 22 years, skipper Virat Kohli sounded proud and delighted with his young team. The tourists decimated the Lankans by 117 runs in the third and final session of the third and final Test to clinch the series 2-1.

India had suffered a heartbreaking defeat in Galle, where they had dominated most of the first Test. Slammed for their over-the-top aggression, Kohli and team director Ravi Shastri were determined to stick to their way of cricket.(Match Report | Scorecard| Highlights)

On Tuesday afternoon, Kohli had become the first Indian skipper since Mohammad Azharuddin to hold aloft the trophy after a Test series since 1993. He praised the bowlers for doing a great job and singled out Ishant Sharma, who grabbed the spotlight both with fiery spells and his volatile mood.

"Ishant bowled his heart out and the Sri Lankans made him angry at the wrong time and that worked for us," Kohli said.

"Being 0-1 down was never easy. I was told it has never been done (away from home), so we created a bit of history. Even the guys who haven't played, guys like Bhuvi (Bhuvneshwar Kumar) and Varun (Aaron) and Bhajji (Harbhajan Singh), ran around and helped everyone.

"It feels nice, especially with such a young team, early in our careers, it is a magnificent milestone. Winning here (in Sri Lanka) for the first time in 22 years is magnificent."

India battled plenty of odds to make this sensational comeback. Murali Vijay did not play the first and last Tests while Shikhar Dhawan was ruled out of the series after his heroic hundred in Galle. Wicketkeeper-batsman Wriddhiman Saha was also ruled out with a hamstring injury, forcing the selectors to call in reinforcements.

But Kohli downplayed the fitness problems in the side and lauded Cheteshwar Pujara for his sensational comeback. The Saurashtra batsman slammed an unbeaten 145 to win the Man of the Match award.

"Injuries always frustrate the team but the attitude has been brilliant and Pujara came in after someone was injured and he saw it as an opportunity and not difficulty. That is why we are playing the kind of cricket we are playing," said Kohli, who also insisted the team needed to improve on certain areas.

Meanwhile, Sri Lanka skipper Angelo Mathews was disappointed and expressed dismay at his batsmen despite good performances by his bowlers.

"I am disappointed, especially after winning a crucial toss and then batting in demanding conditions. Our batting flopped again. The bowlers were outstanding. And then after giving them a 100-run lead, we did not bat well," Mathews said after the match.

Mathews was the highest scorer in the series, finishing with 339 runs and two hundreds - the second ton came as Sri Lanka tried to avoid defeat on the last day.

Comments
Topics mentioned in this article
India Cricket Team Sri Lanka Cricket Team Virat Kohli Sri Lanka vs India 2015 Cricket
Get the latest updates on Fifa Worldcup 2022 and check out  Fifa World Cup Schedule, Stats and Live Cricket Score. Like us on Facebook or follow us on Twitter for more sports updates. You can also download the NDTV Cricket app for Android or iOS.