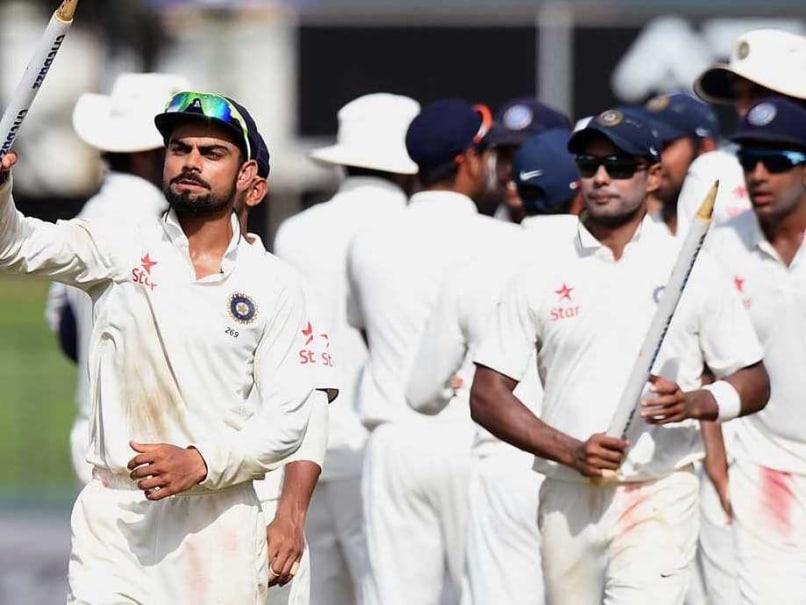 Virat Kohli, young, aggressive and brash, achieved what his more illustrious and composed predecessors like Sachin Tendulkar, Sourav Ganguly, Anil Kumble and Mahendra Singh Dhoni could not - lead India to a Test series win in Sri Lanka. Not since 1993 had an Indian team tasted such success in the Emerald Isles and former skipper Sunil Gavaskar was full of praise for the 26-year-old batsman from Delhi. (Tendulkar, Kumble Congratulate India on Historic Triumph)

After suffering an unexpected defeat in Galle, Kohli, who had advocated passionate and aggressive cricket, pioneered a stunning turnaround to win the last two in Colombo and take the series 2-1. While Sri Lanka were decimated by 278 runs at the P. Sara Oval, they crashed to a 117-run defeat in the final session of the third and final Test on Tuesday. The bowlers bowled with fire and the fielders backed them up - Kohli style!

"Virat Kohli is a proactive captain - he does not let the game stagnate and makes things happen to upset the opposition. But it may not be an option against stronger teams in the longer run," Gavaskar told NDTV in an exclusive chat from Colombo. (Ashwin Credits Good Catching for Record Haul)

Gavaskar had been critical of Kohli's move to bat at No. 4 instead of the more crucial No. 3 spot and had also refused to comment on his leadership abilities after India failed to win any of his first four Tests as captain. He had told NDTV that a more accurate analysis should only be made after Kohli had spent a full season at the helm.(Match Report | Scorecard| Highlights)

But on Tuesday, the former opening batsman said the early signs (as captain) shown by Kohli were very encouraging. "His bowling changes and field placings can upset the opposition. His pro-activeness is a huge plus," Gavaskar said.

Kohli had slammed four hundreds in his first four Tests as skipper but then scored 78 at the P. Sara Oval and followed that up with 18 and 21 at the Sinhalese Sports Club - both of which India won by comprehensive margins. While his contributions with the bat were average, the Delhi dasher impressed with his astute captaincy.

'An Angry Pacer is a Captain's Delight'

Gavaskar also had a word of praise for Ishant Sharma, who finished with 13 wickets in the series, including eight in the third and final Test. After telling the lanky fast bowler to tone down his over-the-top celebrations, Gavaskar said Ishant, who took his 200th wicket on Tuesday, was now in the form of his life.

"Ishant is probably bowling better than he ever has. He has come on very well over the last six months, particularly in this series," said Gavaskar. But he also hoped that the pacer would learn to balance his 'anger' once the objective of dismissing a batsman has been achieved.

"An angry fast bowler is very important (for the captain and team). But once the objective has been achieved, it is important to balance it out. Taking a wicket should be a moment of joy, not a moment of anger," said Gavaskar.

Comments
Topics mentioned in this article
India Cricket Team Sri Lanka Cricket Team Sri Lanka vs India 2015 Virat Kohli Sunil Manohar Gavaskar Ishant Sharma Cricket
Get the latest updates on Fifa Worldcup 2022 and check out  Fifa World Cup Schedule, Stats and Live Cricket Score. Like us on Facebook or follow us on Twitter for more sports updates. You can also download the NDTV Cricket app for Android or iOS.