India may have won a memorable Test series in Sri Lanka but to ignore certain shortcomings during the three matches may prove to be suicidal going forward.

After four years, Team India registered a historic Test series win on foreign soil on Tuesday. The 117-run triumph against Sri Lanka at the Sinhalese Sports Club was followed by pretty pictures of a fist-pumping Virat Kohli and smiling teammates. The celebrations were understandable. After all, it was the side's first Test series win in Sri Lanka since 1993. It was the 16th overseas victory overall. It was the first for the tourists under a 26-year-old captain - one that helped fifth-placed India pick crucial ranking points to close in on arch-rivals Pakistan in world rankings. (Also read: Aggression is the key word in India's win in Sri Lanka)

The positives indeed come out in all their glory after a win - much like the negatives rear their ugly head after defeats. But there were hardly any negatives in the recently concluded series, right? Wrong! 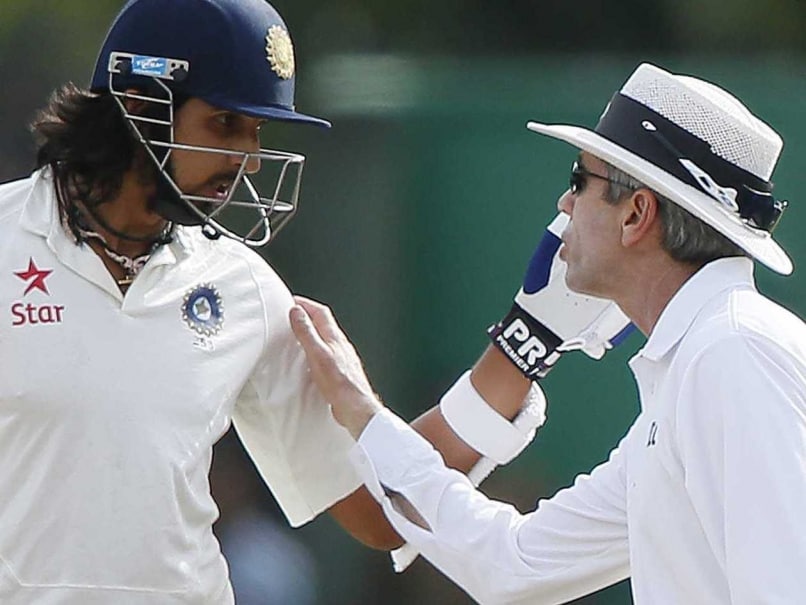 Ishant Sharma has a word with the umpire after an altercation with Sri Lankan players on Day 4 of the final Test.

Ishant Sharma has had his fair share of critics but his bowling in the three Tests against Sri Lanka could have left them all completely shut - only if the pacer himself had stayed shut himself.

Despite 13 wickets from the series, the Delhi bowler will be remembered for his on-field conflicts with the otherwise - and largely genial Sri Lankans. He was fined 65% of his match fees in the second Test for breaching International Cricket Council's Code of Conduct. He was guilty of giving animated send-offs to Lahiru Thirimane and Dinesh Chandimal.

If the fine was aimed more at being a warning, Ishant clearly misunderstood. He returned equally aggressive in the final Test and brandished his 'verbal skills' after being bounced repeatedly by Dhammika Prasad. He would then erupt into wild and almost caveman-like celebrations almost each time he took a wicket in the final innings.

Now pacers were never really known to be docile in a gentleman's sport. Ishant's behavior-- even if a result of provocation - leaves a bitter taste. He got the wickets, bowled his heart out and kept the opposition in check. Where was there ever a need to rub it in?

Now, a one-match suspension has been slapped on him which may be a big loss considering the busy schedule of the team. It though would hardly look good on his resume - regardless of the fact that he is now the fourth Indian pacer with 200 Test scalps.

2) What next for Harbhajan Singh?

Veteran spinner Harbhajan Singh returned to the India team for the tour to Bangladesh. He next went to Zimbabwe. He was also part of the series in Sri Lanka - albeit for a Test. With opportunities galore once again for the Punjab bowler, has he justified his place in the plane? Most would say not quite.

Even as fellow spinners Ravichandran Ashwin and Amit Mishra ran circles around the Sri Lankans, Harbhajan claimed just a solitary wicket from the solitary match he played at Galle. The moment India arrived in Colombo for the final two matches, Harbhajan was consigned to the sidelines as India opted to test other options and succeeded.

So, even as Ashwin walked away with the man-of-the-series award and Mishra showcased his batting skills - scoring a fifty apart from his 11 wickets, Harbhajan was left pondering about his future. Will the Indian selectors continue to reserve a place for the old war horse or is it time to bring in the younger warriors?

He is admired as much for wearing his heart on his sleeve as he is slammed for it. The difference depends on whether his team has won or lost. (Also read: Virat Kohli is a proactive captain, says Gavaskar)

There is no doubt that it is a pleasure to watch a passionate Virat Kohli bat. It is outrightly thrilling for the same person to captain his teammates. There is also no doubt though that Kohli may have overdone it on the third Test's final day of play against Sri Lanka. Instead of reeling in a dangerously gesticulating Ishant, Kohli himself was quite animated after the fall of each wicket. (Also read: Virat Kohli praises fiery Ishant Sharma)

Now his fans may argue that he was desperate for a series win as captain and that such emotions can overcome any human being. Valid point. Except that it serves as a slap on the face of every person who claims that the sportsperson is on the fast track to cricketing maturity. Bad habits die hard?

So he has the highest individual score in ODIs. So he has two centuries and four fifties in Tests. In Sri Lanka though, none of his knocks were ones that would stand out and be remembered for more than five days of Test cricket.

Rohit did manage two fifties in the series but his failure in the first Test - one in which he scored nine and four - brought forth the question: Can he really be relied upon to take India out of troubled waters? Between him and Cheteshwar Pujara, who stands a better chance of anchoring the innings, blunting the opposition and stitching together a big knock?

Team Director Ravi Shastri recently said that no one cricketer owns a batting place in the Indian XI. Is that also true about a place in the XI - regardless of batting or bowling? And if so, will and should India ever choose to drop Rohit to accommodate a bowler or an all-rounder?

These are mere questions but they become relevant in the context of the rich pool of talent at India's disposal. A batsman may not be able to score each time he steps out but men of formidable repute ought to be take more of the responsibility of an innings.

In Sri Lanka, the series was won. Not all future series would be as joyous. Who will be the fall guy then?

5) Injuries to Dhawan and Saha need quick but proper healing

India's next series (against South Africa at home) is some time away but the team will surely be in a rush to have opener Shikhar Dhawan fighting fit again.

The gutsy batsman suffered a right-hand hairline fracture after being hit during the first Test. It was a match in which he had already scored a commanding ton. A statement from the team management on August 17 said Dhawan would need up to six weeks to make a recovery.

Wriddhiman Saha and Murali Vijay were the next big casualties. Both suffered hamstring injuries and were ruled out of the final contest.

For Vijay in particular, it was a recurring problem which means that the Indian management has to be especially careful not to rush players in without being absolutely sure about their return to health.

Comments
Topics mentioned in this article
India Cricket Team Sri Lanka vs India 2015 Cricket
Get the latest updates on Fifa Worldcup 2022 and check out  Fifa World Cup Schedule, Stats and Live Cricket Score. Like us on Facebook or follow us on Twitter for more sports updates. You can also download the NDTV Cricket app for Android or iOS.