The Divine Glance in the Indian Team

Ishant vs the Sri Lankan team was the highlight of the day but as India heads into day 5 on the brink of pulling off their first Test series win in Sri Lanka in 22 years, the highlight of the series could be identified as Virat Kohli's reasonably justified optimism in certain developing teammates. 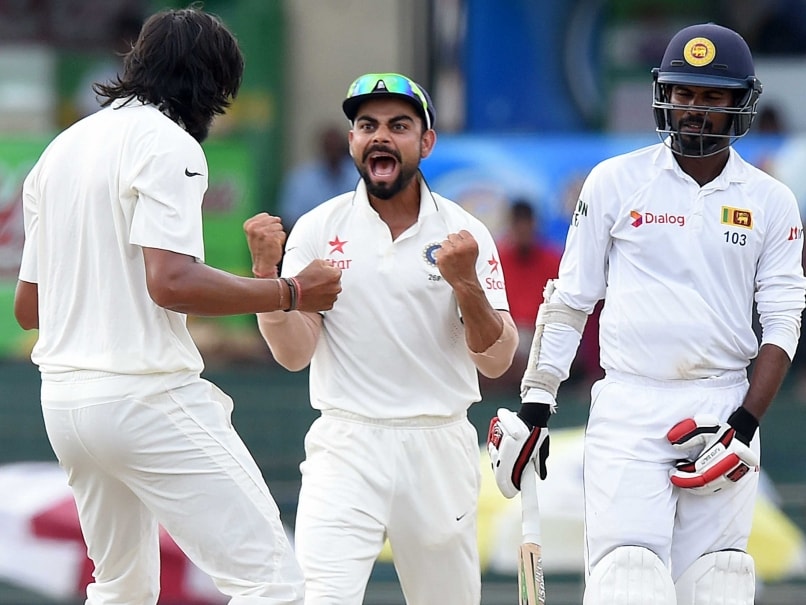 As I listen to a rendition of Chaap Tilak, originally Amir Khusro's poem, sung beautifully by many of the best Sufi singers and groups, I am able to form an analogy that may at first seem a bit over the top but then imagination knows no bounds and you just may be able to relate to it. (Day 4 Blog | Scorecard | Photos)

The central theme of the poem Chaap Tilak as explained to me by my father who is a musician can be broadly described as Amir Khusro saying that 'Nizamuddin Auliya has by his mere glance raised him above observances or mere religiosity in to the depths of divine love and bliss'.

Tone that down considerably or many, many notches and travel to the world of Indian cricket. Virat Kohli, ever since being appointed as Captain, has more than 'glanced' at certain Indian cricketers, given them confidence and place in a team where certain players and the team itself is discovering what their positions and roles are. Virat's confidence is certainly not the depths of 'divine love and bliss' but possibly the depths of a Captain's belief. Belief from a Captain can go a long way in making or breaking a cricketer's career. Just ask Yuvraj Singh, Harbhajan, Virender Sehwag and Zaheer Khan who had the blessings of Sourav Ganguly, arguably India's best Captain ever. I feel the need to emphasize on the word 'arguably' again. (To Call Out the Indian Team or Not?)

The four teammates Virat has more than believed in during the ongoing Sri Lanka series, despite many doubters amongst the critics and the fourth estate, are Rohit Sharma, Stuart Binny, R Ashwin and Amit Mishra.

This is what Virat Kohli said when asked about why Rohit Sharma is being preferred to Cheteshwar Pujara - "I think you have to back your best players. People that you think can be match-winners for you, you have to back them. We felt that if he gets going, even in a Test match, he can take away a session or two from the opposition. That could be the difference in us winning a Test match and getting close (but not close enough)."

Previously this is what Virat has said about Rohit - "I have never seen a guy, after he gets set, be so dangerous, You take the best finishers in the game - [Kieron] Pollard, [James] Faulkner, [Eoin] Morgan - but when Rohit gets set, it is almost impossible to stop him. I mean, it is ridiculous the kind of hitting he does after getting 50. You know if Rohit Sharma is on 50 with four overs to go, you are in troubled waters. Literally, save yourself. I'm not joking."

This is what Virat Kohli said when asked about an all-rounder in Stuart Binny being flown in as a replacement for an injured opener in Shikhar Dhawan - 'With the amount of swing he has, he might not be express pace, but that can really put the batsmen under pressure. We have that sort of variety when Stuart plays. So it's all about how you use him. As an attacking option or as a defensive option in the middle just because you want to give your other bowlers a rest. His batting abilities are improving. I saw him bat in Zimbabwe and I have seen him bat in England. Once he gains in confidence he is a pretty solid batsman. He has good technique as well. If the wicket is a bit helpful or you need control through the innings, Stuart comes handy in those situations. Everywhere around the world you look, they have a spinning all-rounder and a fast bowler all-rounder, so Stuart is the best in that particular category of seaming all-rounder. So, we need to give him more chances, more confidence, improve him, so we can use him at any stage to provide balance to the team. I think Stuart brings a lot to the table and it is about him getting more confident in his abilities. Bringing in Stuart gives us the option of a third seamer. The main reason of bringing him in is to give us more balance in the squad. We will have to have a look tomorrow morning and see how it (pitch) behaves."

This is what Virat Kohli said when asked about the team's decision to go with 5 bowlers in the Galle Test aiming at giving R Ashwin a certain self-belief no other skipper had given him - "Ashwin has a Test average of 40 and I cannot see that why he can't be that all-rounder for us. That's the challenge. Giving people goals and asking them to improve in certain aspects where the team requires."

Kohli has only praised Amit Mishra's attacking intent with the bat in the 1st Test but what words rarely do has been done when Kohli promoted Mishra ahead of R Ashwin who had not got runs in the first 5 innings of the series. Rightly so, considering Mishra looked the part, the best amongst the tail after showing an attacking intent in the first Test and a fifty in the third Test.

These performances have a lot to do with individual hunger, but when your Captain believes in you to increase your appetite, you make an extra effort. How much performing for a Captain means to these players was evident from the expressions of Rohit, Stuart and Amit when they got out on day 4 of the deciding Test. Rohit was transfixed to the ground after getting out and did not move for what seemed like eternity. Stuart Binny slapped his bat on his pads repeatedly and then waited in hope that the umpire would call him back because the bowler had overstepped. Amit Mishra's reaction though was the best. He had dived to avoid a run out. But he was dismissed. Mishra lay chest first on the pitch for twice as long as Rohit had stayed transfixed to the crease. It was quite a sight, but more importantly a realization of how desperate these players were to pay back the faith shown in them by their Captain.

As it stands right now, India is poised to pull off a historic first Test series win in Sri Lanka, and while Rohit, Ashwin, Mishra, and Binny may not have completely done what they are capable of, don't expect Virat to tone down his Nizamuddin Auliya type, confidence giving glance, on these developing Test cricketers.

Do pardon me for what may seem like an outrageous analogy between Virat and Nizamuddin Auliya. It is only an inspiration to make a larger point.

Comments
Topics mentioned in this article
India Cricket Team Sri Lanka Cricket Team Sri Lanka vs India 2015 Cricket
Get the latest updates on ICC T20 Worldcup 2022 and CWG 2022 check out the Schedule, Live Score and Medals Tally. Like us on Facebook or follow us on Twitter for more sports updates. You can also download the NDTV Cricket app for Android or iOS.