India are ready to begin their three-Test series against the hosts come August 12 and Test skipper Virat Kohli is keen to put forward his new plans in action. Russel Arnold feels the young leader might hit the right note with his combination of six batsmen and five bowlers. 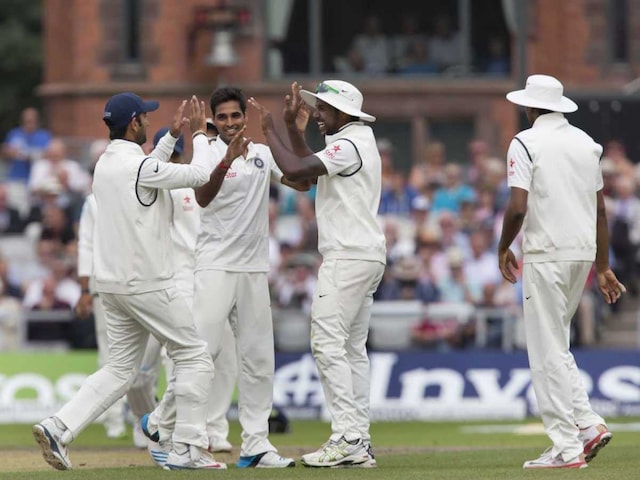 India are ready to begin their three-Test series against the hosts come August 12 and Test skipper Kohli is keen to put forward his new plans in action. Arnold feels the young leader might hit the right note with his combination of six batsmen and five bowlers.(Kohli May Opt for 5 Bowlers)

"India have got four fast bowlers. They have got variety there as well, Bhuvneshwar Kumar who has got swing, Ishant Sharma who gets a bit of extra bounce and then the raw pace. If Sri Lanka go that way they are equipped to counter it," Arnold, who is part of the panel of commentators for Sony Six and Sony Kix, told PTI in an interview.

"But on the other hand they (India) have three spinners in the team too, which Kohli initially indicated that he might go with, but it all changes after seeing the pitch at the end of the day. So it will be interesting to see which combination they will take but from Sri Lanka's point of view, I'd say go with what has worked in the recent past," he added.

The cricketer-turned-analyst is also a fan of six solid batsmen, who do their job.

"Playing six batsmen is a way to attack a team. If you have a batsman who can bowl and vice versa then it's a definite plus. Generally I'd like to take the opposition on. You play six batsmen, they score the runs. Those half-batters try and make runs. Your five bowlers pick wickets, 20 wickets. So you have men who do their job rather than those half players," he said.

Kohli may have been criticised for his aggression at times, but Arnold said a leader should show a bit of arrogance.

"Aggression might not be the right word, but I think to be successful you need a bit of arrogance, to be up there and to be able to try and ruffle the opposition. Virat Kohli has shown those signs and the unit has been different. I mean in Test cricket, he has to prove himself with his approach," he said.

"Now for Angelo Mathews you have to feel as a captain, because he hasn't had too many options. Not many X factors on whom he could have relied on. You can't compare him to the likes of Mahela Jayawardene, who always had a Murali (Muttiah Muralitharan) and a (Chaminda) Vaas. So when in trouble he knew he could shut one end up, which made it somewhat easier," he said about Sri Lankan Test skipper Angelo Mathews.

Ajinkya Rahane comes into this series after a 98 against Bangladesh in the rain-hit one-off Test. The talented batsman also notched up an unbeaten 109 in the tour game and Arnold was all praise for the youngster.

"Ajinkya is scoring runs all over the world. But he hasn't been in as many wins apart from one in England. I believe Rahul Dravid is working with him very closely and he is the one who looks after him even at Rajasthan Royals. So he is learning a lot from Rahul and the way he is continuing, the consistency, the quality of strokeplay, yes, he is certainly living up to the expectations," he said.

"But he needs to that for a longer period of time for you to even compare or bring him near Dravid's stature. Rahane is certainly on the right track," he added.

Arnold though wants Sri Lanka to rely on their pacers rather than spinners.

"Well I am not sure whether spin is the way forward. Because in the last series, Rangana Herath lost his place and they played a youngster (Tharindu Kaushal) who looked good, who caused problems for the Pakistanis but when the game was set for him in the fourth and the fifth day, defending 377, not a lot was needed from him than just the basics but he couldn't do it.

"Now that could be a big blow on the confidence of the Lankan selectors for relying on spin. Now they cannot go back to Herath because he hasn't had much in terms of putting the ball there. I think it would be better if they go with their strength at the moment which is the fast bowlers. They won matches playing the three fast bowlers in the recent past. I am not pretty confident of their spin," he said.

With two relatively young sides up against each other, Arnold admits the series is tough to call but gave India the edge.

"I would say it's tough to call. If you want to say someone is ahead you can say India is ahead, but what Sri Lanka can count on is the fact that India have quality batsmen and an experienced bowling attack, but they haven't played a lot of Test cricket and they haven't won. So it would be important to put India under pressure for the Sri Lankan team.

"(Kumar) Sangakkara will be there for the first two Test matches, but it will be all about the younger players, who have now been around but it's time they are held accountable for their actions. 30s and 40s is not going to be enough, to score the big runs and give the bowlers something to bowl at," he said.

The series will be boradcast live and exclusively on Sony Six and Sony Six HD (English Feed) and on Sony Six (Hindi feed).

Comments
Topics mentioned in this article
India Cricket Team Sri Lanka Cricket Team Sri Lanka vs India 2015 Russel Arnold Cricket
Get the latest Cricket news, check out the India cricket schedule, Cricket live score . Like us on Facebook or follow us on Twitter for more sports updates. You can also download the NDTV Cricket app for Android or iOS.