Nielsen was one two Astana riders who fought hard to get in a breakaway group of 29 riders, along with compatriot Michael Valgren. 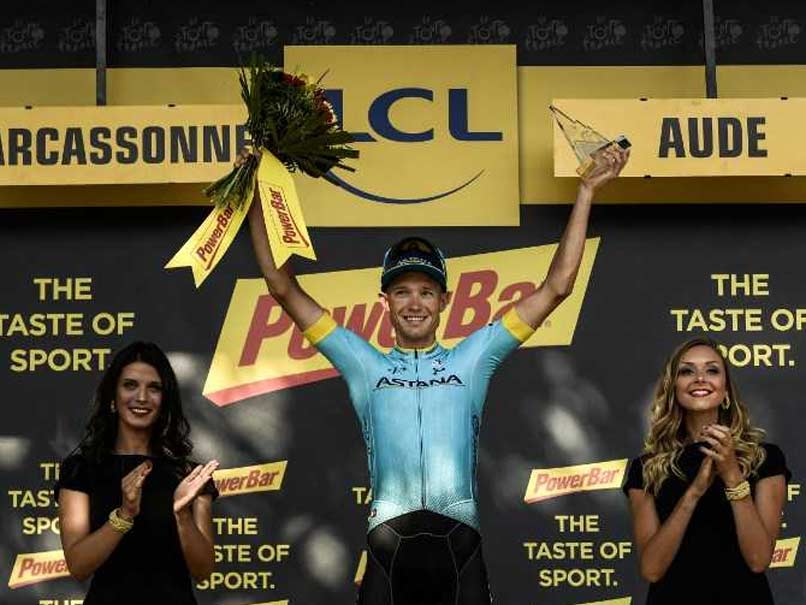 Nielsen was simply unbeatable after launching his sprint just under 300m from the finish.© AFP

Danish race debutant Magnus Cort Nielsen handed Astana their second consecutive victory when he won the 15th stage of the Tour de France in Carcassonne on Sunday. Welshman Geraint Thomas, of Sky, maintained his 1min 39sec race lead over teammate and compatriot Chris Froome after a 181.5km ride from Millau in which the yellow jersey holder's rivals tried, but failed to launch a challenge. Thomas and the main peloton soaked up futile attacks from Irishman Dan Martin (UAE) and Rafa Majka (Bora) before crossing the finish line just over 13 minutes in arrears on what, for them, was a comparatively easy stage ahead of Monday's rest day.

"I've been feeling pretty good. Days like today are always a bit funny because you don't really want to push. You want to recover as much as possible," said Thomas.

The 32-year-old Welshman, however, refused to speculate on whether he, and not Froome, will lead their charge over the following, decisive stages into the Pyrenees mountains.

"No honestly, I'm not thinking about that," added Thomas.

"I'm taking each day as it comes. I'm looking forward to the rest day, then the next stage, the next climb, and just keep on doing what we're doing."

Astana, meanwhile, took full advantage of what was set to be a transition stage ahead of three tough days in the Pyrenees starting from Tuesday.

Nielsen was one two Astana riders who fought hard to get in a breakaway group of 29 riders, along with compatriot Michael Valgren.

And when it came to the final kilometres, the race debutant seized the day.

Nielsen first underlined his ambitions 8km from the finish when he quickly countered Italian Domenico Pozzovivo's effort to break clear.

And two kilometres further on, Nielsen was quick to join Dutchman Bauke Mollema (Trek) and Jon Izagirre (Bahrain) when they left five of their breakaway companions behind.

A lack of cooperation in their wake meant the trio were allowed to build an insurmountable advantage over the closing kilometres.

But Nielsen, 25, was simply unbeatable after launching his sprint just under 300m from the finish, where Izagirre finished second and Mollema third.

"I knew I had the legs to win, and that I would be fastest at the line, but I still kept some powder dry in case," said the 25-year-old Dane.

It is Astana's second consecutive win on the race after Spaniard Omar Fraile capped an audacious attack on the final climb of stage 14 to triumph in Mende.

But both Fraile and Nielsen could now be called upon to put their personal ambitions aside to help their podium contender, Jakob Fuglsang, who is ninth overall at 6:14.

"We made the decision to target stage wins in these past two days, but trying to keep Jakob up as high as possible in the general classification is our priority," said Nielsen.

After Monday's rest day, the race resumes when the 16th stage takes the peloton from Carcassone over five categorised climbs and 218 km to the downhill finish in Bagneres-De-Luchon.