Thomas took the lead of the race on Wednesday with an impressive victory atop La Rosiere on what was the second day in the Alps. 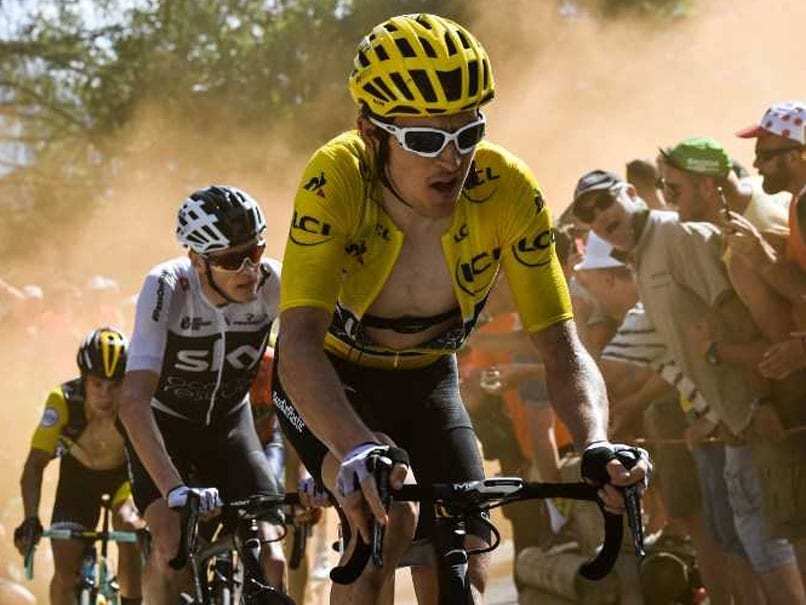 The Welshman, along with teammate Chris Froome, was met by a chorus of boos and jeers.© AFP

Geraint Thomas became the first yellow jersey wearer since disgraced Lance Armstrong to triumph on the legendary Alpe d'Huez after a thrilling finale to a punishing Tour de France 12th stage on Thursday. But the Welshman, along with teammate Chris Froome, was met by a chorus of boos and jeers at the finish as Team Sky's domination of the race continued. Thomas took the lead of the race on Wednesday with an impressive victory atop La Rosiere on what was the second day in the Alps.

In a thrilling finale to the 175.5 km race from Bourg Saint Maurice, the former track rider beat Dutchman Tom Dumoulin (Sunweb) by two seconds in a sprint to the line, with French climbing specialist Romain Bardet (AG2R) in third.

"Not even in my wildest dreams did I believe I would win at Alpe d'Huez, in the yellow jersey," said Thomas, who now leads four-time champion Froome by 1min 39sec in the overall standings. Dumoulin, the 2017 Giro d'Italia champion, is third at 1:50.

"It's just mental. I just can't believe I won the stage. It was just a case of following (teammate) Egan (Bernal)," added Thomas.

Yet hopes of soaking up their success were dashed when fans booed the Team Sky riders as they crossed the finish line.

Earlier, Froome narrowly avoided disaster when he was struck by a fan at the roadside. Italian rival Vincenzo Nibali also crashed due to a collision with a fan but finished the stage.

Team Sky's brutal domination of the race is not sitting well with some fans, but Thomas added: "People have their opinions, and that's fine.

"As long as they don't affect the race that's the main thing."

After claiming the top two positions in the overall standings Wednesday, Sky's rivals were intent on redressing the balance on the third and final day in the Alps.

And for a long while, it looked like Thomas's lead was in danger when Dutchman Steven Kruijswijk launched an audacious attack after he had squeezed into an early breakaway.

Kruijswijk's bid was ultimately futile, and he said: "It's painful. This was one of the stages that was high on my list.

"I didn't plan to go in the breakaway, but once I did, I just had to go for it.

"It's a big disappointment for me, but I'll keep on fighting."

The Lotto Jumbo rider, the highest-placed of the breakaway riders in sixth overall at 2:40 behind Thomas, became the virtual race leader on the long descent of the Col de la Madeleine.

But, as expected, the Sky train ripped into Kruijswijk's lead over the remainder.

Only young Colombian Egan Bernal, on his race debut, was left to pace Thomas and Froome on their pursuit of the Dutchman after the opening kilometres of the 13.8 km climb to the summit.

But the pace was furious.

Spanish veteran Alejandro Valverde's slim hopes of fighting for a podium place ended when he was spat out the back.

With 7km remaining for Kruijswijk, his lead had been halved to two minutes and he was left with slim hopes when Thomas and Froome countered attempts by Dumoulin and Bardet in the closing few kilometres to shake them off.

When Thomas negotiated the final bend with tactical perfection, it gave the Welshman the extra metres required to forge ahead and claim the win.

The last Tour de France race leader to triumph on the Alpe was Armstrong, who was wearing the yellow jersey when he won a time trial in 2004.

The American's stage win, like all his results, was later scrapped from the history books after he was found guilty of doping throughout his career.