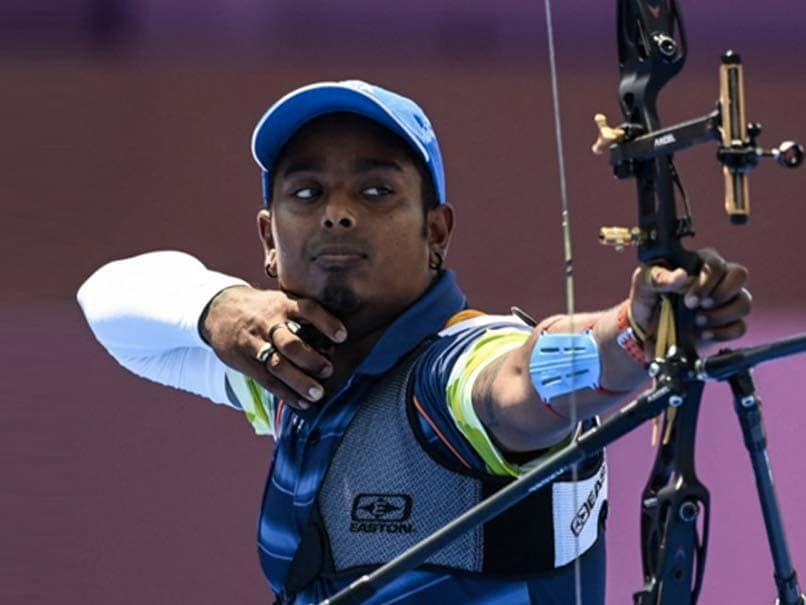 Tokyo Olympics: Atanu Das has progressed to the 1/8 Elimination round in the individual archery event.© AFP

Atanu Das stunned South Korea's Oh Jin Hyek to make it to the 1/8 Elimination round in the men's individual archery event at the Yumenoshima Ranking Field on Friday. The Indian archer shot a '10' to eliminate the 2012 Olympic gold medallist in a shoot-off after the match was tied at 5-5 after five sets. The official India handle for the ongoing Tokyo Olympics took to Twitter to share the highlights of the thrilling shoot-off, and captioned it as, ".@ArcherAtanu of #IND wins 6-5 in a sensational shoot-off against #KOR's London 2012 Olympic champion Oh Jinhyek in Men's #Archery 1/16 Eliminations".

The duo began with an 8 with their first arrows. The South Korean archer then followed it up with two 9s, and Atanu could only respond with an 8 and 9, losing the first set 25-26.

The second and third sets were then split between the archers, 27-27 each. The match was levelled in the fourth set, with Atanu winning 27-22.

It is also worth noting that Jin-Hyek had won the Men's team gold medal earlier at the ongoing Olympics.

Atanu Das had earlier defeated Chinese Taipei's Yu-Cheng dang in the 1/32 Elimination Round.

Comments
Topics mentioned in this article
Olympics 2020 Olympics India
Get the latest updates on IPL 2021, check out the IPL 2021 Schedule and Indian Premier League Live Score . Like us on Facebook or follow us on Twitter for more sports updates. You can also download the NDTV Cricket app for Android or iOS.