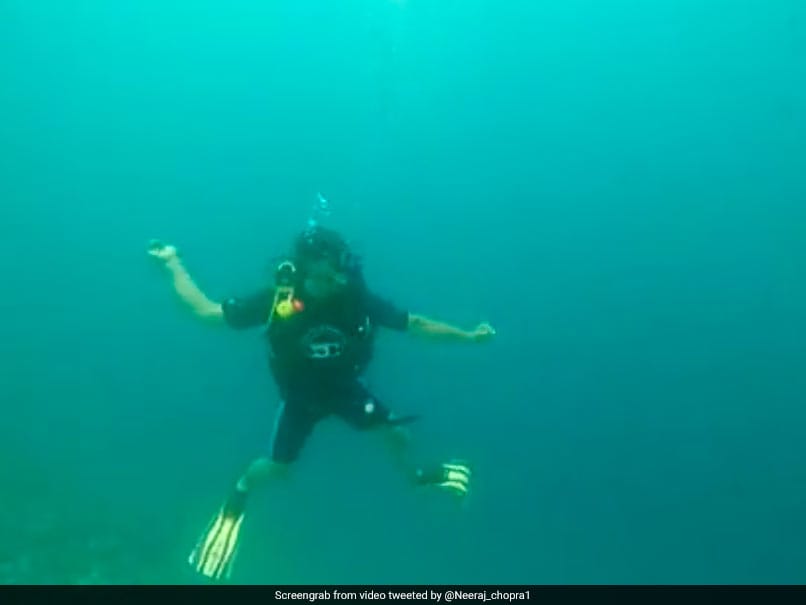 India's Tokyo 2020 gold medallist Neeraj Chopra shared a captivating video of himself practicing his javelin throwing skills underwater. Neeraj Chopra was seen wearing the underwater gear as well while shadow practicing his moves. He shared the video on his social media handles with a caption that said, "Aasman par, zameen pe, ya underwater, I'm always thinking of the javelin! PS: Training shuru ho gayi hai." Chopra, recently, returned as a gold medal winner from the Tokyo 2020 Olympics in the Javelin throw event.

Neeraj performed brilliantly in the Olympics and was simply untouchable from the qualifying round to the final.

The 23-year-old started with a brilliant throw of 86.65m in the first attempt itself as he sealed a spot for the final round.

He went on to better his qualifying throw and registered distances of 87.03m and 87.58m.

Germany's Johannes Vetter, who was tipped as the favourite to win the gold after his 94.20m throw at World Athletics Tour earlier in the year, failed in the final round.

Boxer Lovlina Borgohain won bronze in the women's welterweight (64-69kg) category and so did the Indian Men's Hockey team.

Comments
Topics mentioned in this article
Neeraj Chopra Athletics Olympics 2020 Olympics India
Get the latest updates on IPL Auction 2023 and check out  IPL 2023 and Live Cricket Score. Like us on Facebook or follow us on Twitter for more sports updates. You can also download the NDTV Cricket app for Android or iOS.