Sydney McLaughlin of the United States smashed her own world record as she cruised to victory in the Olympic women's 400m hurdles final on Wednesday. 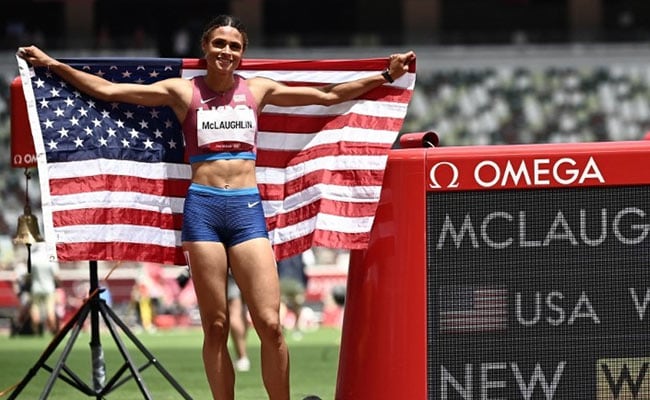 Sydney McLaughlin obliterated her own world record to claim a thrilling last-gasp victory over rival Dalilah Muhammad in the Olympic women's 400m hurdles final on Wednesday. In another classic duel between the two dominant American hurdlers, McLaughlin surged past Muhammad just metres from the line to win in 51.46sec, slicing a whopping 0.44sec off her previous mark of 51.90sec set at the US trials in June. Muhammad, the 2016 Olympic and world champion, took silver with a time of 51.58sec, well inside the old world record, with Femke Bol of the Netherlands earning bronze in 52.03sec.

"What a great race," said McLaughlin. "I'm just grateful to be out here celebrating that extraordinary race and representing my country."

It was another epic world record-breaking battle between the 21-year-old McLaughlin and the 31-year-old Muhammad.

Muhammad set a world record when she won the US trials in 2019 ahead of McLaughlin, before again beating her for gold at the 2019 World Championships in Doha in a near photo-finish with a new record.

McLaughlin avenged that loss in Oregon in June to defeat Muhammad at US trials with a devastating world record run.

McLaughlin's victory on Wednesday came after a superb tactical race which saw Muhammad make a flying start in the lane outside her rival.

Muhammad led coming off the final hurdle but McLaughlin produced a late burst of speed to claim her first gold medal.

"I saw Dalilah ahead of me with one to go. I just thought 'Run your race'," McLaughlin said.

"The race doesn't really start until hurdle seven. I just wanted to go out there and give it everything I had.

The win came a day after the men's 400m hurdles race produced an epic duel between Karsten Warholm and Rai Benjamin, which ended with Norway's Warholm also setting a world record.

"I can't really get it straight in my head yet. I'm sure I'll process it and celebrate later," McLaughlin said of her record run.

McLaughlin's world record on Wednesday is just the latest in a slew of records that have tumbled on the Olympic Stadium track, which athletes at the Games have said is conducive to fast times.

McLaughlin's hurdles gold was the first of five medals to be handed out on Wednesday.

The highlight of the evening session will come in the men's 200 metres, where the USA's Noah Lyles will aim to make up for a blunder which almost cost the reigning world champion and favourite a place in the final.

Lyles only qualified for the final as one of the fastest semi-final losers on Tuesday after inexplicably pulling up at the line in his semi-final.

That allowed him to be overtaken by Canada's Aaron Brown and Liberia's Joseph Fahnbulleh.

"I'm glad I made it to the finals and that is all that matters," a relieved Lyles said afterwards.

Other medals up for grabs on Wednesday include the men's 800m final, the women's 3,000m steeplechase and the men's hammer.

Wednesday also saw the start of the decathlon and heptathlon multi-discipline events.

Britain's Katarina Johnson-Thompson is looking to add Olympic gold to her 2019 world championship victory, while Canada's Damian Warner and French world champion Kevin Mayer battle it out in the decathlon.

Comments
Topics mentioned in this article
Olympics 2020 Olympics Athletics
Get the latest updates on ICC T20 Worldcup 2022, check out the Schedule and Live Score. Like us on Facebook or follow us on Twitter for more sports updates. You can also download the NDTV Cricket app for Android or iOS.