London Olympic silver medallist shooter Vijay Kumar on Monday said that he wants to leave Indian Army as he has not been given a single promotion in last six years despite performing well at both the national and international levels. 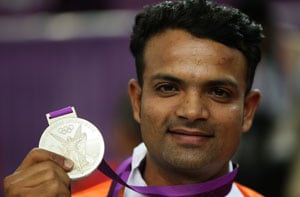 London Olympic silver medallist shooter Vijay Kumar on Monday said that he wants to leave Indian Army as he has not been given a single promotion in last six years despite performing well at both the national and international levels.

Unheralded Vijay, who is a subedar with 16 Dogra Regiment, provided the silver lining for India in London Games last week, clinching the second place in the 25m rapid fire pistol event.

"Indian Army helped me in shooting by giving me coaching facilities and providing me with pistol and ammunition but I need money for my daily needs," Vijay told 'PTI Bhasha' from London.

"Since 2006 I won many national and international medals that include 2010 Commonwealth Games' three gold and one silver medal. But I have not been recommended by my seniors. I have not given any promotion or honorary award or any other kind of facility," he added.

Six-time national champion, Vijay had won two silver at ISSF's World Cup. And though he missed out on a medal in rapid fire event at Guangzhou Asiad, he won two bronze in air pistol and center fire pistol. He also won a gold medal at Doha Asian Games.

"I have been continuously performing well in shooting, but I have not given any reward. I am still a subedar," complained Vijay.

Asked if he has written to his seniors about this, Vijay said, "Nothing is given in written. It is done automatically.

If somebody is performing well, he is recommended by seniors."

Himachal Pradesh government has announced Rs 1 crore for Vijay but he is not satisfied with it as he is not been given any state awards so far.

"After 2010 CWG, Haryana, Punjab and other states gave promotion to their players but I have not received any award from my state where Parshuram and Himachal Gaurav award is given to those players who perform well at national and international level," he said.

Comments
Topics mentioned in this article
Shooting Olympics 2012 India
Get the latest updates on Fifa Worldcup 2022 and check out  Fifa World Cup Schedule, Stats and Live Cricket Score. Like us on Facebook or follow us on Twitter for more sports updates. You can also download the NDTV Cricket app for Android or iOS.