At Lord's, bows and arrows replace bat and ball

Lord's, the historic 'home of cricket', was bathed in brilliant sunshine on Wednesday -- perfect conditions for a Test match. 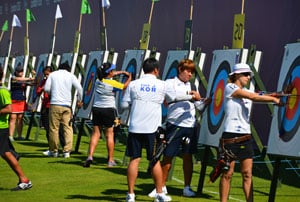 Lord's, the historic 'home of cricket', was bathed in brilliant sunshine on Wednesday -- perfect conditions for a Test match.

But any members of Marylebone Cricket Club (MCC), which owns the north London ground, turning up hoping to hear the comforting sound of leather on willow reverberating around the venerable venue over the next week or so will be in for a shock.

For the keys of Lord's have been handed over to the London 2012 Olympic Games Organising Committee (LOCOG) to stage the archery competition, which gets underway on Friday.

And on Wednesday, 48 hours before the first arrow whistles across the velvet green carpet towards its target, competitors from India were putting in some practice at the Pavilion end.

Behind the targets, a 14 metre high purple backdrop has been erected, with giant Olympic rings emblazoned on the spaceship-style press box suspended over the Nursery End on the far side of the ground.

Flanking the archery arena are two metal grandstands with room for 6,500 spectators.

While Lord's has been used in the past for sports other than cricket this is the first time its owners the MCC have relinquished control of the ground since the Second World War, when Britain's Royal Air Force moved in.

"It was a huge thing for the MCC to allow us to use Lord's," Peart conceded.

"But they couldn't have been more helpful, the only stipulation they made was that we couldn't touch the centre of the ground."

He added: "The atmosphere will be electric, and we've got lots of MCC members coming to watch. They want to witness this latest chapter in the history of Lord's."

Lord's has dusted off its crusty image and made serious strides at keeping pace with the modern world - women finally being admitted as MCC members in 1999.

But the lowering of the MCC flag and the raising of the IOC and LOCOG standards in its place during the height of the English cricket season ranks as one of MCC's more radical move.

Olympic personnel and athletes have taken up residence in the magnificent Pavilion where MCC chief executive Derek Brewer's first floor office is now a doping centre.

A copper plaque at the graceful front door to the Grade II Listed building reads: "Whilst in the pavilion gentlemen shall wear ties and tailored coats and acceptable long trousers with appropriate shoes."

The bare-chested workman, wearing a bright yellow hard hat and torn shorts, sauntered past the notice, happily oblivious to the centuries of tradition he was flouting.

For India's 2010 Commonwealth Games gold medal winner Rahul Banerjee, competing at Lord's is a dream come true as he and his colleagues target a first ever Olympic archery medal.

Placing his bows gently down by his side after his practice session the 29-year-old Kolkata-born archer told AFP: "I'm cricket mad, everyone's crazy about cricket in India, so to be here is amazing.

"I've watched lots of Tests from Lord's, it's hard to believe I'm walking out on the ground where my hero Sachin Tendulkar has played.

"There is enormous interest in archery back home. It's historic to be here, and we want to make more history at the Games, if we can continue our good form we have a reasonably good chance of picking up a medal."

"It's different," Waugh said. "I never thought I would see it like this, and I'm sure the MCC members didn't either. It increases the profile of Lord's across the world."

Meanwhile Lord's groundsman Mick Hunt will no doubt be keeping a watchful eye on his beloved workplace during the Games, with normal service set to resume there four days after the closing ceremony when England face South Africa in the third Test.

Comments
Topics mentioned in this article
Archery Olympics 2012 Lord's, London
Get the latest updates on India vs England Series, India vs England , live score and IPL 2021 Auction . Like us on Facebook or follow us on Twitter for more sports updates. You can also download the NDTV Cricket app for Android or iOS.