More than 80 years after Launceston Elliot was buried in an unmarked grave in a Melbourne cemetery, Britain's first Olympic champion will have a headstone placed on his final resting place. 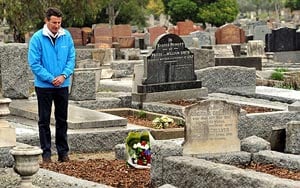 More than 80 years after Launceston Elliot was buried in an unmarked grave in a Melbourne cemetery, Britain's first Olympic champion will have a headstone placed on his final resting place.

Elliot, who died of cancer in 1930 seven years after moving to Australia from Scotland, was a single-handed weightlifting gold medalist at the 1896 Athens Games.

Elliot's grave was discovered in 2004 at Fawkner Cemetery in Melbourne. But it wasn't until two-time British Olympic gold medalist and London Games chief executive Sebastian Coe visited the grave last year that progress was made toward getting a headstone.

The ceremony will be held Sunday and will be attended by Elliot's granddaughter, Ann Elliot Smith, who lives in Brisbane, and her New Zealand-based son Ian.

"I was brought up with the history of my grandfather and how famous he was," Elliot Smith said. "We knew he was buried, but didn't know where. I've still not discovered why it was an unmarked grave.

"When they told me about the headstone, I was so proud and so excited because I had tried myself to get a plaque put there but couldn't get anywhere until Sebastian Coe appeared on the scene. Coe said it was sacrilege that a great man such as Launceston had not been recognized."

Comments
Topics mentioned in this article
Olympics 2012 Other Sports
Get the latest updates on ICC Women's Cricket World Cup 2022 and IPL 2022, check out the Schedule , Live Score and IPL Points Table. Like us on Facebook or follow us on Twitter for more sports updates. You can also download the NDTV Cricket app for Android or iOS.