Jimmy Neesham had challenged KL Rahul for a game of "Paper, Scissors, Rock" after New Zealand beat India by five wickets in the third ODI to sweep the ODI series. 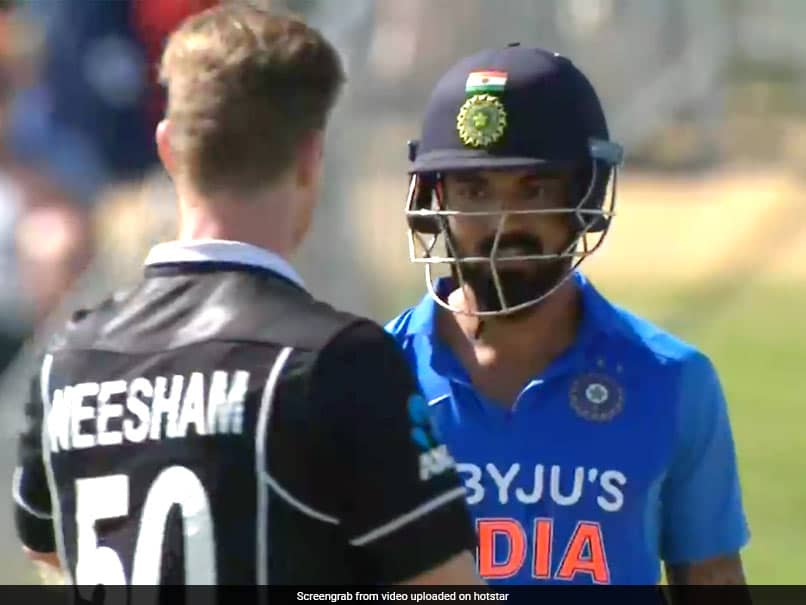 KL Rahul and Jimmy Neesham were involved in a friendly banter during the third ODI.© Screengrab from video posted on hotstar.com

KL Rahul took to Twitter to respond to New Zealand all-rounder Jimmy Neesham's "Paper, Scissors, Rock," challenge on Wednesday. Jimmy Neesham had tweeted a picture with KL Rahul after the third One-day International in Mount Maunganui. In his tweet, Neesham had challenged KL Rahul for a game of rock, paper, scissors. Rahul, who will lead Kings XI Punjab in the upcoming edition of the Indian Premier League (IPL), accepted the challenge from his IPL teammate.

"Let's settle this in April. See u in a bit," KL Rahul tweeted.

Let's settle this in April. See u in a bit

Neesham will represent Kings XI Punjab in IPL 2020 as he was roped in by the Punjab-based franchise for Rs 50 lakh at the auction last year.

On Tuesday, New Zealand defeated India by five wickets in the third ODI to sweep the series 3-0.

India, after being asked to bat, posted a challenging total of 296 for seven from their allotted 50 overs in the 3rd ODI.

KL Rahul top-scored for the visitors with his fourth ODI century.

For New Zealand, Hamish Bennett did the damage with the ball as he picked up four wickets in his 10 overs including the prized scalp of KL Rahul.

Chasing 297 for the win, New Zealand got off to a flying start. Martin Guptill and Henry Nicholls put on 106-run stand for the opening wicket.

Colin de Grandhomme finished the game with 17 balls to spare as he brought up his fourth ODI half-century off just 21 deliveries.

Don't forget to save some runs for April aye @klrahul11 ?

The teams will now lock horns in the two-match Test series starting February 21.

New Zealand Cricket Team New Zealand vs India, 2020 Cricket
Get the latest updates on IPL 2020, check out the IPL Schedule for 2020 and Indian Premier League (IPL) Cricket live score . Like us on Facebook or follow us on Twitter for more sports updates. You can also download the NDTV Cricket app for Android or iOS.