"Why Do You Put Tongue Out Every Time You Score 100": Harbhajan Singh Takes Dig At Ross Taylor

Ross Taylor stuck out his tongue while celebrating his match-winning century in the first One-day International against India at Hamilton on Wednesday. 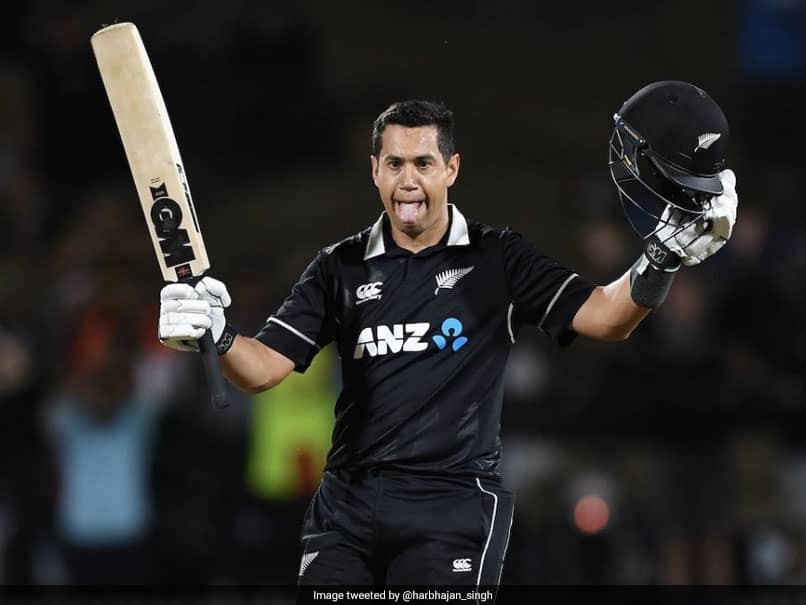 Ross Taylor top-scored for New Zealand with 109 not out in 1st ODI against India.© Twitter

India lost the first One-day International (ODI) of the three-match series against New Zealand by four wickets in Hamilton on Wednesday. However, veteran India spinner Harbhajan Singh didn't leave a chance to make fun of Ross Taylor's unique celebration after he scored a match-winning century for New Zealand. Harbhajan Singh's tweet started with praise for the New Zealand batsman, but it later turned into a joke at the expense of Ross Taylor. "What a knock @RossLTaylor well done. Tell me why do u put the tongue out every time score 100. Good game of cricket," Harbhajan Singh said in a tweet.

Indian Premier League franchise Chennai Super League, for which Harbhajan Singh plays, joined the trolling of Taylor with a comment, saying: "What a naak!"

According to a report published on cricket.com.au in 2015, Taylor said his 'tongue poking' celebration is a tribute to his daughter Mackenzie.

"Right back when I was at age group I got dropped a couple of times when I got hundreds," he had told Wide World of Sports.

"Then I poked my tongue out - (after) I got dropped - against Australia, my second ODI hundred. Ever since then my daughter has been pretty happy when I poke my tongue out and that's pretty much for her as well," he added.

On Wednesday, Taylor scored an unbeaten knock of 109, including 10 boundaries and four sixes, to help New Zealand win the series opener and take a 1-0 lead.

For India, Shreyas Iyer scored his maiden ODI hundred as the visitors posted 347/4 in 50 overs after being asked to bat.

However, the home team -- after having suffered a 0-5 loss in the five-match T20 International series to India -- bounced back and chased down the challenging target with 11 balls to spare.