Coming from a humble middle class family in a small town of Rewa, the 24-year-old was on Tuesday named in both the Test and ODI squads for India's upcoming tour of New Zealand. 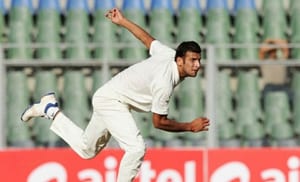 It was a perfect New Year's gift for Ishwar Pandey as the lanky medium pacer on Tuesday became the first player in 18 years from Madhya Pradesh to be named in the Indian Test side.

It was former India leggie Narendra Hirwani who donned the Test cap for the last time from the big Indian state, while former left-hander Amay Khurasia was the last international cricketer to have played an ODI in 2001.

Coming from a humble middle class family in a small town of Rewa, the 24-year-old was on Tuesday named in both the Test and ODI squads for India's upcoming tour of New Zealand.

It was a celebration time in Rewa today with congratulatory messages pouring in for Pandey, who though chose to concentrate on challenges ahead.

"No doubt it's a big news for my state. The time has come for me finally. I've been working hard for this moment and it has come," a soft-spoken Pandey told PTI from Rewa.

"But it's not time to celebrate as yet, I would have more challenges ahead. I have to keep working hard and remain focussed," he added.

Pandey's main weapon is his outswingers, an art which was honed by South African great Allan Donald during a month-long stint in the IPL team -- Pune Warriors -- this year.

"I always like to bowl outswings but it was during my stint in Pune Warriors, I improved on it. He (Donald) really worked on my outswingers. I'm really thankful to him," said Pandey.

He also credited legendary Aussie duo of Dennis Lillee and Glenn McGrath at the MRF Pace Foundation for bringing out the best in him.

"I learnt a lot from them, it was really a dream for me to bowl under the tutelage of McGrath, whom I consider my bowling idol, apart from Kapil Dev."

The six-foot-two-inch frame Pandey, who bowls regularly at 130kph, further said he's not going to cut down on his speed.

"I'm sure the conditions in New Zealand will aid pace bowling. I'm not going to compromise on my pace while bowling in the right areas," he insisted.

Playing for India A during their tour to South Africa earlier this year, Pandey took 11 wickets in two four-day games and five in two one-dayers. He is now looking to utilise his Proteas experience.

"It was a very successful tour for me... I'm sure the conditions in New Zealand will be something similar."

His father, a retired subedar-major, wanted him to become a doctor but he took up cricket and made it big during his Under-19 days.

It was his coach Aril Anthony who stood behind him and Pandey was all praise for his mentor.

"It's all because of him I became a cricketer. He really supported me well and I'm proud to have lived up to his expectation," a humble Pandey added.

In eight matches in the ongoing Ranji Trophy season, Pandey has taken 30 wickets at 24.76, including his career-best figures of eight for 84 against Railways.

Comments
Topics mentioned in this article
Cricket Ishwar Pandey New Zealand Cricket Team India Cricket Team New Zealand vs India 2014
Get the latest updates on India vs South Africa and check out  Schedule, Results and Live Score. Like us on Facebook or follow us on Twitter for more sports updates. You can also download the NDTV Cricket app for Android or iOS.