Jesse Ryder began 2014 on a good note with scores of 104 and 47 in two One Day Internationals. With a home series against India soon to follow, the troubled big-hitting left-hander could be on the path to redemption. 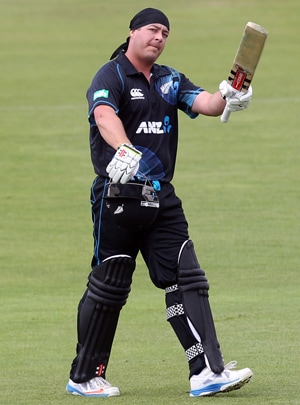 Jesse Daniel Ryder silently made his way back into the spotlight on the first day of 2014 with the sixth fastest One-Day International ton against an insipid West Indian bowling attack at the picturesque venue in Queenstown, New Zealand. While his partner for the fourth-wicket stand of 191 from 75 deliveries - Corey Anderson - stole the show with the quickest century in ODIs, Ryder slammed a 46-ball ton to give himself and the fans who've stuck by him through thick and thin some renewed confidence.

In his six-year-long career so far, Ryder has been in and out of the side for reasons other than his form with the bat and ball, leaving most admirers frustrated, some even surprised by the manner in which he has shown the dedication to make a comeback on each occasion. Little do they know that this mental strength dates way back to his childhood. There was a phase in Ryder's life when he was left abandoned by his divorced parents. Finding shelter at his friends' place, Ryder picked up the bat and ball, perhaps to divert his mind from his tumultuous personal life. His decision to do so, turned out to be a life-changing one.

However, unfortunately for the 29-year-old, controversies and problems have followed him everywhere like a shadow. Less than two weeks after scoring his first ODI half-century, Ryder overdid his celebrations following a series win over England in 2008 and ended up hurting his hand. The injury ruled him out for three months. This was just the beginning of a series of alcohol-related issues that kept him away from the game.

The following year, the burly left-hander was benched for an ODI against the West Indies for missing a team meeting and practice session due to late night drinking on the previous day. While not grappling with a drinking problem, Ryder has been a menacing batsman, proving to be a thorn in the opposition's flesh on multiple occasions. His golden period arrived in March 2009, when he slammed 105, 46 and 63 in three consecutive ODIs against India and followed it up with the best knock of his career so far - his double ton at Napier.

When in form, Ryder put all his off-field troubles and antics behind and managed to captivate onlookers with his appetite for powerful strokes through covers and his deft wrist-work while playing shots off his hips. Yet, just month-and-a-half after scoring the double ton, Ryder was staring at controversy, through another drunken incident, this time in South Africa during the second season of IPL in 2009. Towards the end of that year, Ryder's verbal outburst against the erstwhile New Zealand team manager David Currie was played down. Despite a pulled muscle, Ryder slammed 74 off 58 deliveries, but was in a irritable mood after returning to the pavilion, leading him to break a chair and fire expletives towards Currie.

Time and again, Ryder proved that he was a bundle of talent with a flawed temperament, a feature that has pegged him back severely, nullifying thegiant strides forward he often took. Ryder soon took an indefinite sabbatical to set his house in order. It was a period when New Zealand Cricket refused to consider him for a central contract, despite growing support from the likes of Ross Taylor and Brendon McCullum, vouching for his talent and calling on him to prove his commitment to the national side.

After missing from action for seven months, Ryder returned to the first-class fold with a bang, scoring 117 and 174 for Wellington, proving that he was far from done, that he still had a point to prove. But, a rather similar script followed as he was soon fined $750 for showing dissent against on-field umpires in a domestic game.

Ryder then had the worst possible start to 2013 when he was assaulted outside a bar in Christchurch which landed him in the intensive care unit of the hospital. He spent a few days in induced coma due a fractured skull as the cricketing fraternity was on tenterhooks, praying for his speedy recovery. He survived and overcame what was the biggest challenge of his life, but had to remain on the sidelines for the next six months after failing a routine drug test.

His latest 'comeback' has been good so far, with scores of 104 and 47 in the two games he has played. Just 18 Tests and 42 ODIs to his name seems like an unfair reflection of his talent and on-field ability, but his lack of temperament has often stopped him in his tracks. A home series against India, beginning on January 19, could be the perfect platform on which he can attempt to revive his dwindling career. However, given his history of misdemeanours, it is perhaps too soon to say that he is finally on the mend. At 29, though, this could really be his last shot at redemption.

Comments
Topics mentioned in this article
Cricket Jesse Ryder India Cricket Team New Zealand Cricket Team New Zealand vs India 2014
Get the latest updates on Fifa Worldcup 2022 and check out  Fifa World Cup Schedule, Stats and Live Cricket Score. Like us on Facebook or follow us on Twitter for more sports updates. You can also download the NDTV Cricket app for Android or iOS.