Corey Anderson, a record-breaker with a vision

Corey Anderson recently broke the record for the fastest ton in ODI history. Rather than setting his sights on a lucrative IPL contract, Anderson is determined to cement his place in the New Zealand side in the upcoming series against India. 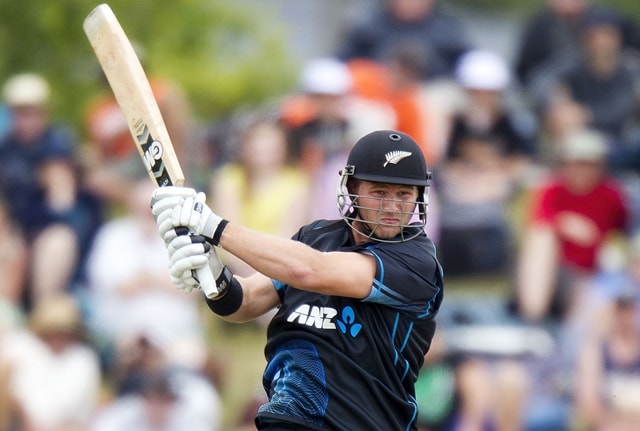 New Zealand all-rounder Corey Anderson took the cricket world by storm in the third ODI versus West Indies in Queenstown on New Year's day. In a rain-curtailed 21 overs-a-side game, Anderson came into bat in the eighth over. By the 18th over, he reached his century in just 36 deliveries, breaking Shahid Afridi's long-standing record for the fastest-ever ODI hundred by a ball. Anderson hit six boundaries and 14 sixes in a knock that brought the 23-year-old to the attention of Twenty20 franchises across the world.

With fresh Indian Premier League auctions scheduled on February 12 and 13, Anderson is likely to be one of the most sought-after players. It has been reported that fellow Kiwi and Chennai Super Kings coach Stephen Fleming is keen to sign him for the franchise. However, Anderson claims he is more focused on his country at the moment, with a cash-boosting five ODI, two-Test series against India which begins this month.

"At the moment, I am concentrating on cementing my place in the New Zealand side," said Anderson. "The series against India should be a good one as they are a world-class side with some fantastic talent." However, he does admit that "it would be nice" to take part in the IPL. West Indies skipper Dwayne Bravo has already indicated that he would like to see Anderson in CSK colours from next season.

Anderson, rather unfairly, has been compared to South African opener Richard Levi - who holds the record for the fastest century in T20 internationals but couldn't sustain himself in the national side. Anderson is, by all indications, a much better player. Over the past year, he has featured for New Zealand across all formats with his all-round abilities. With the bat, he is a renowned power-striker and his left-arm medium pace provides a valuable bowling option to skipper Brendon McCullum.

Anderson was part of the New Zealand A side that toured India last year. It was here that he finally caught the selectors' attention with a century in Visakhapatnam against India A. Anderson was fast-tracked to the Test squad and credits this innings for his rise. "A century against a good Indian attack in their conditions always gives the belief that you can do it on the big stage," said Anderson in an interview to the Times of India. "It was humid out there and we were playing against a quality opposition. That knock gave me the belief that I could handle conditions different from what we have back home."

However it would be folly to expect too much too soon from the burly left-hander. Anderson has only played a handful of games in each format.Â  In five Tests, he already boasts an impressive average of 37, including a century against Bangladesh in Dhaka. Anderson has played eight ODIs with an outstanding average of 55 and six T20s with a blistering strike rate of 175. In all these games he has taken 21 wickets as well.

Going back to his record-breaking ODI century against the West Indies, Anderson says that he just "went with the flow". According to him, the record was never on his mind during the entire innings. Even Afridi, the man whom Anderson displaced, had words of praise for the young Kiwi. "I never heard his name and early morning my nephew told me about his feat and I sort of said the first news of 2014 is of my record being broken," the maverick Pakistani all-rounder said. "But I must say it's a great achievement and Anderson deserves all the praise. It needs a super effort to score a hundred off 36 balls."

The Indian side face a stern test against an ever-improving New Zealand when the tour begins with the ODI series in Napier on January 19. An in-form Anderson is primed to cause a lot of headaches for MS Dhoni and Co. who are striving for a long-overdue success away from home.

Comments
Topics mentioned in this article
Cricket Corey Anderson India Cricket Team New Zealand Cricket Team New Zealand vs India 2014
Get the latest updates on Fifa Worldcup 2022 and check out  Fifa World Cup Schedule, Stats and Live Cricket Score. Like us on Facebook or follow us on Twitter for more sports updates. You can also download the NDTV Cricket app for Android or iOS.