India vs New Zealand: Top-five players to watch out for

After a tough tour of South Africa, Mahendra Singh Dhoni &amp; Co. travel to New Zealand for a five-match One-Day International series followed by two Tests. Here's a look at five players from both sides who will be expected to play a crucial role in the outcome of the series. India begin year 2014 with a tour of New Zealand starting on January 19 with the first one-dayer at Napier. After a tough 1-0 Test loss and 2-0 ODI thrashing in the tour of South Africa, Mahendra Singh Dhoni and Co. aim to get their bearings right at the picturesque venues in Kiwi land. Cricket.NDTV.com takes a look at the top-five players from both sides who are likely to make an impact. With just over a year to go for the 2015 World Cup in Australia and New Zealand, this series could be an audition round for many youngsters.

Shikhar Dhawan's form in South Africa left a lot to be desired. However, the attacking left-hander isn't one of those who would let his failures affect his game. His 78 runs from 4 Test innings and 12 runs in two ODIs against Dale Steyn and Co. highlighted few weaknesses -- lapse in concentration and poor shot selection. Although he did try to dig in and bat patiently under pressure in the second innings of the Durban Test, contrary to his natural style of play, Dhawan did not look comfortable during his stay at the crease. He will now face fresh challenges in New Zealand and it will be interesting to see how he copes against seamer-friendly tracks Down Under. Dhawan is likely to be bombarded with the same style of bowling from Tim Southee, Neil Wagner, Trent Boult and Mitchell McClenaghan that Steyn & Co. offered in South Africa.

After having impressed in overseas tours of Australia, South Africa and England, Virat Kohli would want to leave a stamp of his class in New Zealand as well. One of the leading batsmen in world cricket at the moment, along with the likes of AB de Villiers and Hashim Amla, Kohli's hunger for runs in all forms of the game makes him one of the most feared players for the opposition. He was second in the batting charts, not too far behind Cheteshwar Pujara in the two Tests in South Africa, scoring 272 runs in 4 innings. Kohli's willingness to diligently work on and improve his game has shown that he has not many weaknesses that the oppositions can target. In New Zealand, where Kohli would be touring for the first time, he will be up against swing and seam of the Kiwi pacemen who tend to revel in home conditions.

He seemed to have conquered his first major test overseas on the South Africa tour but such is international cricket, challenges don't stop. A tour of New Zealand is going to be a fresh opportunity for Pujara, who has made giant strides in Test cricket in the last one-and-a-half years. Centuries at home against New Zealand, England and Australia last season, including two double tons, helped him clinch the 2013 ICC Emerging Player of the Year award. But Pujara still had to prove himself overseas and he did that after topping the batting charts (280 runs in 4 innings) in the two Tests in South Africa. Along with Virat Kohli, Pujara forms the linchpin of the young Indian batting line-up. Brought up on low and slow surfaces in India, the Saurashtra run-machine did have some trouble playing against late swing of Dale Steyn and seam and bounce of Morne Morkel but his determination to stick it out in the middle kept him going. With more swing and seam on offer when he plays the two Tests in Auckland and Wellington, Pujara faces another stern test.

Mohammed Shami has had a promising start to his international career. So much so that in a short span of time, Shami has become MS Dhoni's go-to bowler whenever team needs a breakthrough. Shami topped the wickets tally in the three ODIs in South Africa, scalping 9 wickets at an average of 20.55. He gets the ball to move late at a decent pace of around the 140-kmph mark. The 23-year-old has the ability to bowl long spells and thus, is a valuable option in Tests. With the older ball, he gets it to reverse and has a crushing incoming yorker in his repertoire. Windy conditions in New Zealand will suit his style of bowling and the Bengal pacer will be the strike bowler for Dhoni's team in both ODIs and Tests.

After a disappointing ODI series at home against Australia, Ishant Sharma came back strongly in the one-dayers in South Africa, registering his second-best figures of 4 for 40 in Centurion. That earned him the Test spot ahead of Bhuvneshwar Kumar and he did not let his captain down by picking up five wickets in the 1st Test at Johannesburg. However, he went wicketless in the second Test at Durban, a surface which was not helping the Indian pacers. MS Dhoni has mentioned that once the conditions are unfavourable for his seamers, they have lacked a quality hit-the-deck kind of bowler that Ishant, with his built and ability could have been, if not for his inconsistencies. Pitches in New Zealand, though, may favour Ishant but the six-feet-four-inches tall bowler will strive for a disciplined effort to gain the rewards. A good series here may keep in contention for the 2015 World Cup.

Apart from their stalwart batsmen in skipper Brendon McCullum and in-form Ross Taylor, we look at some of the young Kiwi players who could make a difference in this home series against India.

After Ross Taylor, who has hit a purple patch this season scoring 866 runs in 2013, Kane Williamson has been a steady contributor for the Kiwis in the last two years. At just 23, he carries a mature head on his shoulders and is looked upon as a future captain by many former players. In 11 Tests last year, right-handed Williamson scored 747 runs. He an appetite for runs and can bat for long periods of time, much like India's Cheteshwar Pujara. This makes him a big wicket for the opposition. He has a clinical defensive technique and boasts of classy strokeplay. Williamson, who scored a Test ton on debut against India, will be looking to be a dependable option in the Kiwi middle-order.

Perhaps, had it not been for his whirlwind record 36-ball fastest ODI century, he wouldn't have got any mention here. Left-handed all-rounder started off 2014 with a bang as he hammered a blistering 47-ball unbeaten knock of 131, to power New Zealand to a resounding 159-run win over West Indies on January 1. His explosive knock contained 14 sixes and 6 fours in the picturesque Queenstown. No doubt, his big-hitting skills will get noticed by IPL franchisees ahead of this year's auction and is likely to be one of the choicest picks this season. But, there is more to Anderson than just sixes and fours. He bowls left-arm fast medium and can generate uncanny bounce, thanks to his burly build and provides a decent bowling option for Brendon McCullum. Very early in his international career, Anderson has showed penchant for scoring runs in the subcontinent in the longer format as well, when he scored a solid 100 off 126 balls in the second unofficial Test against India A at Vizag in September. A month later he scored a responsible 116 - his maiden Test ton - against Bangladesh in Mirpur. With the ball, Anderson has a total of 11 Test wickets in 5 games. New Zealand will hope that the 23-year-old is not a one-hit wonder like South African opener Richard Levi and becomes a force in Kiwi cricket for years to come.

At 24, Tim Southee is the leader of the New Zealand pace attack and also the most experienced. A right-arm fast bowler, Southee gets the ball to swing late at brisk speed, making him a deadly weapon for any side to possess. On his best day, Southee can be as lethal as a ferocious Dale Steyn or as unplayable James Anderson. Southee will be one of the main bowlers India will be wary of. Southee, the highest-ranked Kiwi bowler in Tests currently, took a career-best 7 for 64 in the Bangalore Test in 2012. The Northern Districts bowler has been in rollicking form, having picked up 30 wickets in his last five Tests. His ability to generate late movement both ways gives him an edge over Indian batsmen who succumbed to the exploits of Steyn in their last Test and ODI outings. 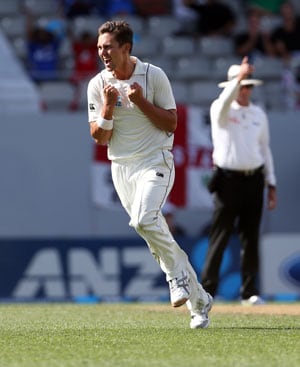 This left-arm fast bowler, along with Tim Southee, is one of the mainstays of the New Zealand attack because of his ability to bowl fast and move the ball both ways. After a promising start to his international career in 2011, the 24-year-old has had a terrific last year, picking up 46 wickets in 12 Tests at an average of 25. His recent exploits prompted ICC to nominate him for the Emerging Player of the Year award for 2012-13. Picked primarily in the Test side, Boult brings a lot of variety in the Kiwi pace attack. In his last series against the West Indies, Boult picked up 20 wickets in 3 Tests, helping the hosts steamroll the Caribbean team. Boult idolizes Wasim Akram and will be itching to torment MS Dhoni and Co.

One New Zealand bowler that has made a huge impression in limited-overs cricket in recent times is Mitchell McClenaghan. The left-arm fast bowler announced himself at the international level when he became only the second Kiwi bowler to pick up a four-wicket haul on ODI debut, when he finished with four for 20 against South Africa in Paarl in early 2013. McClenaghan, 27, also impressed when New Zealand played ODIs in England. He took a total of 19 wickets on helpful conditions in England in just 6 ODIs in May-June, including 11 wickets in three games in the ICC Champions Trophy. McClenaghan is on his way to be one of the fastest to reach 50 ODI wickets, as he has 43 wickets from 17 games already. A decent showing against India in the 5 ODIs starting January 19 may help him push for a Test debut as well.