MS Dhoni keen to continue as skipper in all three formats

MS Dhoni feels it is not feasible to have a change of captaincy in any formats with the 2015 World Cup just a year away. He believes that the new person will not have enough time to gain the experience required. 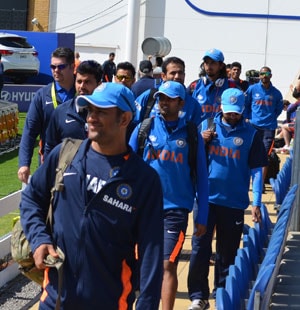 Mahendra Singh Dhoni is not averse to the idea of continuing as the skipper of the the Indian cricket team in all the three formats, saying it would be unfair to burden a new player with the mantle of captaincy with just one year left for the World Cup.

"I think, it's a point of no return with the World Cup literally one year away from now. It won't give a new guy the ideal time to play, at least, 70-80-90 games beginning to the World Cup, that's what we would like to have him play before the World Cup", Dhoni said.

"I understand the pressure, it's not always that you turn up and at the same time, you get the kind of things which give you more experience than the others. So, we have to go through it," he said at a promotional event here on Monday.

Dhoni, India's World Cup winning captain, was responding to a question on giving up captaincy in one of the formats to prolong his career.

Dhoni had, last year, said that he might have to give up a format to lead India's title defence in 2015 but such a decision would be made only at the end of 2013. Dhoni will be 33 by the time the World Cup starts in Australia and New Zealand.

The skipper said he is feeling a lot fitter and healthier than ever.

"I was really fortunate to see where I am right now with the amount of cricket that we are playing these days. As of now, it's looking good. The body is closely knit together. How it will be (in future), I don't know but so far so good," he said.

As the talks veered towards India's disastrous tour of South Africa, where the Men in Blue lost both the ODI and Test series, Dhoni said one bad session in Durban cost them the second Test.

"Yes, we had some tough times. We had a bad session. We had one really bad session because of which we were on the losing side," he said.

However, as always, Dhoni picked up the positives from the Proteas series.

"I think the process is more important. The last couple of series before the South African series were I can't even say a decent or a bad one, it can go worse than that, but the good thing is that at least we know the players are there. We had a lot of good sessions in South Africa.

"It's a process where we have to improve and also the fact that now we will be continuously playing out of India, so it will give more exposure to the players. Most of the players, who are part of the side barring a few, they have not played, may be, more than five Test matches outside India. I know they will take some time but the overall performance was good," he added.

Critics have often questioned Indian bowlers' ability to take 20 wickets on foreign soil and Dhoni said it's one area where the team needs to improve.

It was, after all, the fast bowlers' inability to dismiss the South African batsmen twice on a helpful pitch at Wanderers that deprived India of a Test win.

The inclusion of pacers Ishwar Pandey and Varun Aaron in the touring squad of New Zealand has made one thing clear that the team management is looking out for bowlers who can take 20 wickets in Tests.

"We have got the same amount of talent. We have bowlers who can take 20 wickets but still this is one area where we need to improve. I think on the wickets that are helpful we have done well. Our bowlers have done exceptionally well. Outside India, at times, you get wickets where we have to hit the deck hard and that goes completely opposite to what our bowlers actually bowl.

Comments
Topics mentioned in this article
Cricket India Cricket Team MS Dhoni New Zealand Cricket Team New Zealand vs India 2014
Get the latest updates on Fifa Worldcup 2022 and check out  Fifa World Cup Schedule, Stats and Live Cricket Score. Like us on Facebook or follow us on Twitter for more sports updates. You can also download the NDTV Cricket app for Android or iOS.