New Zealand vs South Africa: Honours even after Day 2

A gripping second day of Test cricket at the University Oval in Dunedin left precious little separating the teams, with New Zealand five runs ahead of South Africa's 238, with a wicket in hand. 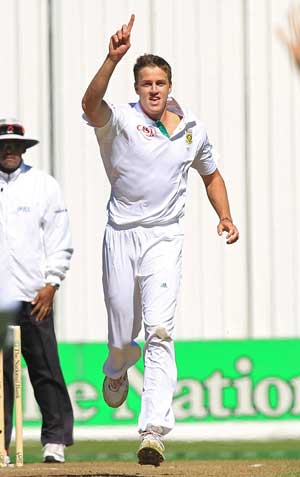 A gripping second day of Test cricket at the University Oval in Dunedin left precious little separating the teams, with New Zealand five runs ahead of South Africa's 238, with a wicket in hand. New Zealand's top order battled swing bowling of the highest quality before lunch and aggressive short pitched pace after it, but could not definitively wrest the advantage, as South Africa prised wickets at regular intervals.

No New Zealand batsman crossed fifty, though Brendon McCullum, Ross Taylor and Daniel Vettori all came close, with 40s to their name. Taylor and McCullum had survived a brutal encounter with Morne Morkel after lunch, but could not apply themselves long enough to consolidate, while Vettori fell to a brilliant low take from Jacques Kallis on his follow through.

Vernon Philander rarely strayed a few inches from off stump in his first spell of the day, and was rewarded with the wicket of Rob Nicol, who had struggled on debut. Philander finished the day with 4 for 50 - another performance that will embellish a growing reputation as one of the most exciting seam-bowling finds in recent memory. Morkel finished with two, having peppered McCullum and Taylor with as hostile a spell as they are ever likely to encounter, while Steyn will feel he bowled better than 1 for 71 suggests.

Martin Guptill and McCullum may have thought they'd blunted the worst of South Africa's assault in the hour before lunch, but the interrogation continued well into the afternoon session, as Morkel unleashed a ferocious spell once movement began to dwindle for his team-mates. The slower Dunedin track had hampered Morkel prior to lunch, but a return to the crease with renewed vigour yielded immediate results, as Guptill was late on a defensive stroke, and tested the mettle of New Zealand's most experienced batting pair.

A smattering of welts on Taylor's arms, chest and shoulders will let him know he has been in a fight. He wore several in his first exchange with Morkel - two on the fingers, one on the ribs and two more glancing blows just below the helmet grille. Edges deflected off the body, landed short of the slips or flew just wide. Though New Zealand had done well to lose only one wicket to an artful hour of swing and seam bowling in the first session, they were now examined gruffly with the next weapon in South Africa's armoury.

Though clearly intimidated, Taylor and McCullum refused to be shaken. While Morkel was often unplayable, the runs started to tick at the other end when Philander's impeccable line began to waiver. Movement from earlier in the day had all but disappeared, and the drives down the ground that had grown more profitable became New Zealand's favoured currency.

But as has been the case so many times in their careers McCullum and Taylor's belligerence proved to be their downfall. Having battled through two terrific spells from one of the world's finest attacks, they aggressed too early, and too mindlessly, just as consolidation beckoned. Their 65-run association was broken when McCullum attempted to sweep Imran Tahir hard against the turn, serving up a high top edge, before Taylor chased a wide one and was caught behind. He'd already hit two fours in the over.

Vettori mounted a familiar recovery alongside Kruger van Wyk, working the South Africa attack square of the wicket with so little fuss his team-mates' innings seemed grating by comparison. Sweetly struck boundaries to the cover point fence and the swivel pull shot to the leg side were as productive as ever, pushing Graeme Smith to deploy four men on the fence - the most defensive field across both days of the Test.

Debutant van Wyk meanwhile was steady and organised. South Africa's pacemen towered over him, and Morkel gave him the perfunctory working over - but if van Wyk was intimidated, there were few signs. The back foot defence was his favoured reply to the seamers, but he was equally adept against spin - picking Tahir better than most in the order, and even tickling him fine with the occasional paddle sweep.

Vettori was eventually undone by indecision, as he was cruising towards a fifty that would have been New Zealand's first of the innings, when Jacques Kallis dived low on his follow through to snaffle a half-hearted bunt. Doug Bracewell then joined the resistance - showing the kind of batting prowess that has earned him three first class fifties, but which hasn't yet been evident at the top level. He put on 41 alongside van Wyk, ensuring first his defence was in order before attempting the more expansive strokes - five of which brought him a boundary, as New Zealand edged towards the first-innings lead.

van Wyk and Tim Southee fell in quick succession to the second new ball, as Philander embellished an already-menacing career average. But Bracewell was good enough to edge his side ahead, before losing his off stump to Steyn.

The first session lacked the drama of the two to follow, but Steyn's new-ball partnership with Philander was unlucky to have only gleaned one reward. In bright sunshine, Steyn found the movement in the air that had eluded New Zealand's bowlers under cloud cover the previous day, after South Africa's tail added 47 to the overnight score before being finished off.

Steyn beat both opener's edge repeatedly and emphatically, with Philander doing the same at the other end - he did it with his pinpoint line and movement off the seam. McCullum and Guptill were forced to call on every sinew of expertise to ensure survival, and they hobbled to lunch, at 40 for 1, only to be bombarded by Morkel when play resumed.