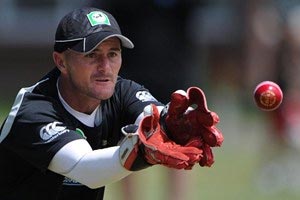 Black Caps physiotherapist Paul Close said a problem with Watling's right hip joint meant he was unable to play in the first Test in Dunedin.

"The nature of the injury is such that we were concerned about BJ's ability to get through the match, based on the high workloads required by a wicket-keeper batsman," he said, adding that it was unclear how long Watling would be sidelined.

The injury gives van Wyk, 32, who was born in South Africa and moved to New Zealand in 2006, an opportunity at the top level late in his career.

The Proteas have dominated the home team during their first trip to New Zealand in eight years, winning the Twenty20 series 2-1 and cruising to a 3-0 whitewash in the one-day series.

A whitewash in the three-match Test series would see them overtake England as the number one team in the ICC world Test rankings.