The 15-man New Zealand team for the South Africa was declared on Friday. Brendon McCullum is the captain. Veteran batsman Peter Fulton has been recalled to the New Zealand squad after a three-year absence and will vie with Australian-born Dean Brownlie to replace former captain Ross Taylor in the batting lineup. 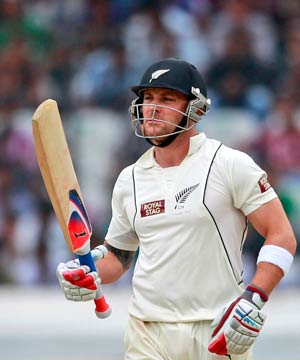 Wicketkeeper Kruger van Wyk has missed the chance to play test cricket in his native country after being omitted from the New Zealand team to tour South Africa later this month.

Despite averaging 21 and making 24 dismissals in nine tests since his debut against South Africa in New Zealand last year, van Wyk lost his place to another South African-born player, B.J. Watling.

Watling, who has played just one test for New Zealand, was favored by selectors for his superior batting ability. He has been sidelined with a hip injury since his wicketkeeping debut for New Zealand last summer.

Veteran batsman Peter Fulton has been recalled to the New Zealand squad after a three-year absence and will vie with Australian-born Dean Brownlie to replace former captain Ross Taylor in the batting lineup.

Taylor declared himself unavailable for the tour on Friday after being fired as captain. Brendon McCullum will now captain New Zealand in all forms of the game, beginning with its two tests, three one-dayers and Twenty20 internationals in South Africa.

"We don't require a leg-spin option in South African conditions so have left out Todd Astle, but he is very much part of our thinking for the future," New Zealand coach Mike Hesson said. "Bruce Martin is a specialist spinner who can bowl a lot of overs and he deserves an opportunity after showing good recent form."

Hesson said all five had shown "considerable promise" in domestic matches and deserved a chance at international level.

"We believe the squad has a good blend of experience and young talented players who we are sure are ready for the challenges ahead," he said.