New Zealand will have a new wicketkeeper in its one-off Test against Zimbabwe later this month after incumbent Reece Young was dropped from the squad. 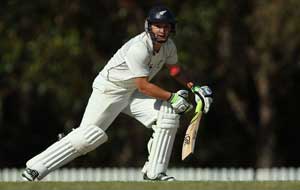 New Zealand will have a new wicketkeeper in its one-off Test against Zimbabwe later this month after incumbent Reece Young was dropped from the squad.

The wicketkeeping duties in the January 26 Test in Napier will be handed either to Kruger van Wyk, a South African-born wicketkeeper batsman who has yet to play a Test, or B.J. Watling, who is also South African-born and played his six previous Tests as an opening batsman.

Watling will keep wicket for a New Zealand XI in a three-day warm-up match against Zimbabwe while van Wyk, who plays for Canterbury province, will play in that match as an opening batsman.

Former Test wicketkeeper Brendon McCullum is also named in the 12-man squad but he no longer keeps at Test level due to injuries.

Young's omission follows his batting failures in New Zealand's recent two-Test series against Australia. The 32-year-old, who has scored almost 4,000 first class runs, has made only 169 runs in five tests.

Watling's selection reflects the desire of New Zealand coach John Wright to have a genuine batsman in the wicketkeeping role, to add strength and balance to his Test line-up.

If Watling is selected as a keeper for New Zealand's first home test of the summer, he will likely bat No. 7 while former captain and all-rounder Daniel Vettori will move up from No. 8 to No. 6. That would allow New Zealand to play four quicks with the left-armer Vettori as specialist spinner.

"There's a lot of competition for the wicketkeeping spot in the country at the moment," Wright said.

"It's tough on Reece, his keeping has been good and he knows that if he goes back to domestic cricket and scores runs he will remain in the frame."

"B.J. will get a chance to prove himself with the gloves in the three-day game and Kruger will open the batting. A decision on who will take the gloves in the Test will be made closer to the start of the match."

Watling and van Wyk came into the squad for Young and top-order batsman Jesse Ryder who has a calf injury and is out of form.