My call-up has come at the right time: Stuart Binny

Stuart Binny may be nearing 30 but he feels that his international call-up has come at the right time. 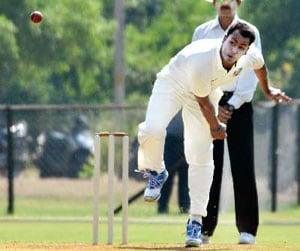 He was a part of the victorious U-19 World Cup squad in 2000 which had the likes of Yuvraj Singh, Mohammed Kaif who had made their international debut within a few months, but it took close to 13 years for Stuart Binny to break into the Indian team when he is nearing 30. Ironically, he replaced Yuvraj Singh in the New Zealand-bound ODI squad but the 29-year-old Karnataka all-rounder feels that the call came at the right time.

"I think if I would have got a call back then, I wasn't ready for international cricket back then. But now after some consistent performances in the domestic circuit, I feel more confident about playing international cricket," Binny told reporters after having played a game-changing knock of 88 against Delhi at Feroze Shah Kotla here today. With his father and former India all-rounder Roger Binny being a part of the national selection committee, Binny junior knows that his performance will be under scrutiny even more.

"Well, I can't say anything about that. When I got out there in the field, I only concentrate on my performance and nothing else. As far as my father is concerned, he is my first and only coach till date. Whatever I have learnt till date is from him as I picked up the game at his academy. People find our actions similar as he was the one who taught me how to swing the ball," Binny said asked about his father Roger's role in his career. His first senior team tour is of New Zealand but Binny shared that his first junior international trip was also to New Zealand.

"When I made my India U-19 debut, the first tour we had was of New Zealand back then. It's funny that my frst trip with senior team is also to same country." For Binny, the 2011-12 season was a breakthrough one as he scored more than 700 runs and picked up 25 wickets.

"That was the season where I felt that I was doing justice as an all-rounder as I scored runs and took wickets. I was converting my 40's and 50's into big hundreds," he said.

"Having toured with the India A team to South Africa earlier this year also helped. There were atleast 7-8 guys of the current India team who were there. They helped me get used to rigours of international cricket," Binny said.

He missed out on a couple of seasons after joining the rebel Indian Cricket League (ICL) but the time spent with Steve Rixon turned out to be useful.

"It were those two years that gave me a chance to reflect on my game. I knew the comeback wasn't easy but I had worked hard. I worked a lot with Hyderabad (ICL) coach Steve Rixon on various aspects of my game," Binny said.

For the burly all-rounder, it is the pressure situation that brings the best out of him as it happened on Tuesday.

"Today it was around 73 for four and my natural game is to attack the bowling. Since I started using my feet and charging the spinners, they tried bowling a bit flatter. This helped me play those late cuts. Pressure situation brings the best out of me. This year, I started with a century but then couldn't convert the starts. I am happy this innings helped the team's cause," Binny stated.

He got the news during the tea-break and for the first few overs in the post-tea session Binny admitted it was difficult to concentrate.

"I was speaking to my partner (Karun Nair) and was pleasantly shocked. It took two to three overs to realise that I was in the team. Then Ashish (Nehra) came in to bowl and said that I am going to get at you. He is still pretty quick," he concluded.

Comments
Topics mentioned in this article
Cricket Stuart Binny India Cricket Team New Zealand Cricket Team New Zealand vs India 2014
Get the latest updates on IPL 2021, IPL Points Table , IPL Schedule 2021 , live score . Like us on Facebook or follow us on Twitter for more sports updates. You can also download the NDTV Cricket app for Android or iOS.