Troubled batsman Jesse Ryder was omitted on Thursday from New Zealand's 15-man Test squad to tour the West Indies, with South Africa-born paceman Neil Wagner one of two new faces in the line-up. 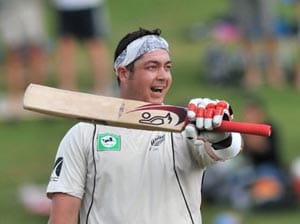 Troubled batsman Jesse Ryder was omitted on Thursday from New Zealand's 15-man Test squad to tour the West Indies, with South Africa-born paceman Neil Wagner one of two new faces in the line-up.

Despite some strong performances in the Indian Premier League (IPL), Ryder remains on the outer with New Zealand selectors after a string of alcohol-fuelled incidents, most recently after a one-dayer in Napier in March.

The 27-year-old, who has also fought a well-publicised battle with his weight, took a break from the game after the Napier indiscretion and then set off for India to play in the IPL with a clinical psychologist in tow.

The therapy appears to have paid off, with Ryder averaging a respectable 32 for the Pune Warriors to stand 17th on the overall IPL runs tally.

New Zealand Cricket (NZC) did not address Ryder's absence in a statement announcing the squad, but chief executive David White spelled out the selectors' position last week, saying a recall was "a fair way" off.

"He needs to do a lot of work on a lot of things like fitness, attitude and be exemplary off the park," White said.

Wagner and leg-spinner Tarun Nethula were the only uncapped players in the squad for two Tests against the West Indies, the first in Antigua starting July 25 and the second in Kingston from August 2.

Wagner was rushed straight into the squad after meeting residential eligibility criteria following his move from South Africa in 2008.

National selection manager Kim Littlejohn said the 26-year-old was an exciting prospect who had performed well in the domestic competition and earned an opportunity at Test level.

Wagner joins another South Africa native, Kruger van Wyk, in the New Zealand Test squad after he made his debut for the Black Caps against the touring Proteas in March.

The West Indies trip will be coach John Wright's last tour in charge after he announced earlier this week he was resigning following tensions with NZC's director of cricket John Buchanan.

The Test series will follow five one-dayers in the West Indies, plus two Twenty20 internationals, which will be played in the US state of Florida on June 30 and July 1.