Yuvraj Singh has been in scratchy form ever since he made his India comeback in the ODI series against Australia and was dismissed for a second-ball duck in the last ODI he played against South Africa at the Wanderers. Selectors drop Pragyan Ojha from Test squad. Madhya Pradesh pacer Ishwar Pandey picked. 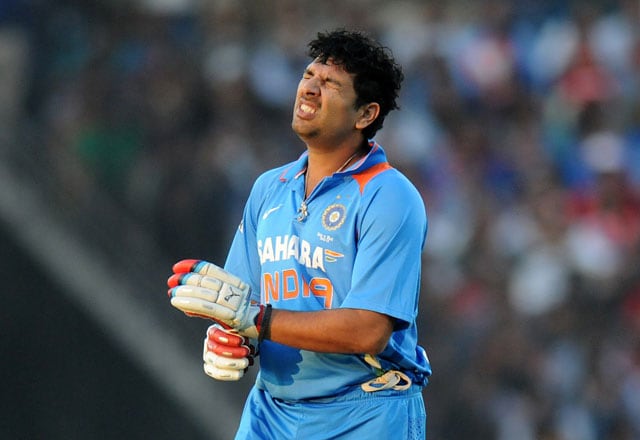 Indian selectors on Tuesday, dropped flamboyant batsman Yuvraj Singh from the squad for the five-match One-Day International (ODI) series against New Zealand, starting on January 19 in Napier. The ODI series will be followed by two Tests, commencing on February 6.

Yuvraj has been in scratchy form ever since he made his India comeback in the ODI series against Australia. He scored 19 runs in four innings, thrice losing his wicket to Aussie pacer Mitchell Johnson. His last ODI was at the Wanderers earlier this month where he scored a second-ball duck. Karnataka's Stuart Binny, son of former Indian all-rounder Roger Binny, will take his place in the ODI squad.

BCCI secretary Sanjay Patel said the selectors deliberated for over two hours before picking the squads for the New Zealand tour. He said the South African tour was discussed and the selection of the squads was "unanimous." "It is not wrong to say that our performance (in South Africa) was bad. We have analyzed things in a better way, our focus is on 2015 World Cup," Patel told reporters.

Binny, 29, has played 53 first-class matches for Karnataka and scored 2714 runs at an average of 34.79, besides taking 79 wickets. Another surprise inclusion in the team was Madhya Pradesh seamer Ishwar Pandey, who has been drafted into both ODI and Test squads. Fit-again pacer Varun Aaron, 24, has made a comeback to the ODI squad replacing Mohit Sharma, who failed to impress in South Africa. If he makes it to the final XI of the five-match ODI series against New Zealand, it would be Aaron's first 50-over appearance for India after 2011.

The Test team was not altered too much with Ishwar coming in place of Pragyan Ojha. This was the only change made to the 17-member squad that did duty in the two-Test series in South Africa. India play a couple of Tests against the Kiwis starting February 10 in Auckland. The second Test will be played in Wellington. The 24-year-old Ishwar has played 31 first-class matches, grabbing 131 wickets at an average of 24.43. Given the conditions Down Under, including a pacer in place of a spinner was a good decision by the national selectors who met in Mumbai.

While Murali Vijay, Ajinkya Rahane and Virat Kohli were picked after fine performances in the trying tour of South Africa, Shikhar Dhawan and Rohit Sharma have managed to retain the selectors' faith despite a dismal show. Senior pacer Zaheer Khan would once again spearhead the Indian pace attack in Tests with Ishant Sharma, Bhuvneshwar Kumar, Umesh Yadav, Mohammed Shami and Pandey to support him on the seaming tracks of New Zealand.

The ODI squad also sports a pace-heavy look but the spearhead's role will be taken over by Ishant as Zaheer has not been named for the five-match series.

The batting line-up remains more or less the same, except for Binny coming in to take Yuvraj's place. The specialist all-rounder's role continues to belong to Ravindra Jadeja, who performed well with the ball but disappointed with the bat in South Africa.

The tour of New Zealand will start with the first ODI in Napier, followed by matches in Hamilton (Jan 22 and Jan 28), Auckland (Jan 25) and Wellington (Jan 31). The Indians will play a two-day warm-up match in Whangarei from February 2 followed by the two-match Test series in Auckland (Feb 6 to 10) and Wellington (Feb 14 to 18).

Comments
Topics mentioned in this article
Cricket New Zealand Cricket Team India Cricket Team New Zealand vs India 2014
Get the latest updates on IPL 2021, IPL Points Table , IPL Schedule 2021 , live score . Like us on Facebook or follow us on Twitter for more sports updates. You can also download the NDTV Cricket app for Android or iOS.