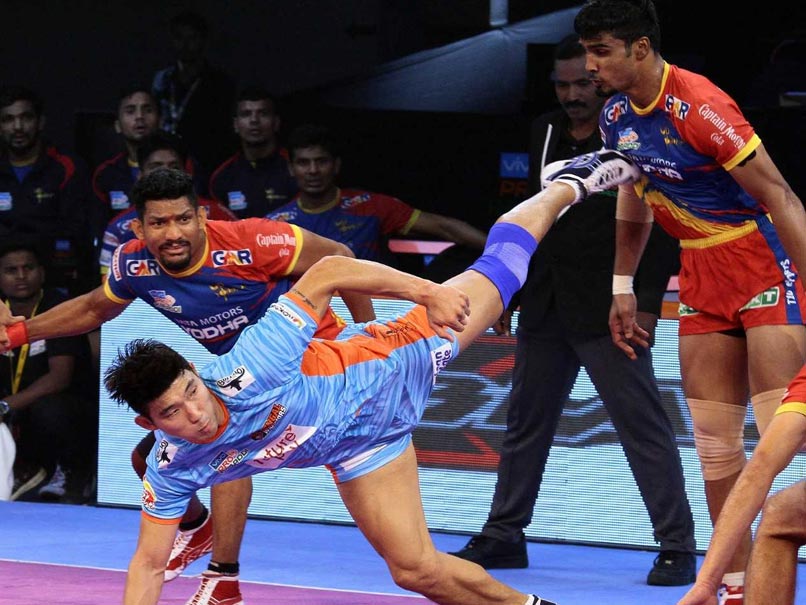 In the other game on Saturday, Puneri Paltan beat U Mumba© Pro Kabaddi League

Bengal Warriors' winning streak came to an end as UP Yoddhas forced them to a draw in the 25th match of the Pro Kabaddi League in Pune on Saturday. UP's Prashant Kumar Rai became the game changer as his crucial two successive raid points in the dying seconds denied Bengal their third win in the ongoing league. Maninder Singh bagged 16 raid points for Bengal while Prashant picked 13 as the contest resulted in a thriller.

In another match, Puneri Paltan defeated U Mumba 33-32, and it turned out to be a very close encounter. The match was held at the Shree Shiv Chhatrapati Wrestling Hall in Pune.

South Korean star Jang Kun Lee made some successful raids to give Bengal a 4-0 lead. However, UP Yoddhas rode some fine tackles to slowly make a comeback. They gradually reduced the lead to 5-6 before the scores were tied at 8-8.

Both sides showed equal fight to again be tied at 12-12. UP's Maninder then collected a couple of points to stretch his team's lead to 15-12, but Jang replied with a successful raid to cut the deficit to one point.

Bengal however, failed in stopping UP from picking another three points in the last minutes of the first half, while it could only manage a single point as the scoreline read 18-15 at half-time.

In the second half, Rishankcame up with a heroic performance, collecting three raid points, which along with a successful tackle saw UP leading the charge at 24-18.

UP continued to lead the momentum, thanks to captain Rishank, as they extended the lead to 27-19. Bengal's star raider Jang not only failed in replicating his first half show but also faltered in the second half as Bengal had no answer to UP's attack, which took a massive 30-24 lead in the last few minutes.

Maninder showed some fighting spirit as the raider picked two points in as many raids to make the contest 30-26.

Later, Rishank's unsuccessful raid followed by Maninder's another successful raid brought Bengal back in the contest as they made it 28-30 in the 34th minute.

Bengal then inflicted an all out in the 35th minute to level the score 32-32 through a tackle. Their defence later made them lead the issue 34-32 before Maninder's successful raid gave them another point as Bengal took a 35-33 lead but UP's Prashant replied through a fine raid to once again cut the deficit to one point.

Bengal's Maninder and UP's Prashant each collected a few points through some successful raids as once again both the teams found themselves tied at 38-38 before the former grabbed a couple of points to hand Bengal a 40-38 lead.

In a crunch situation, Prashant, who seemed unstoppable, collected a bonus point before taking a match tying raiding point to help UP deny a defeat as the contest resulted in a 40-40 draw.