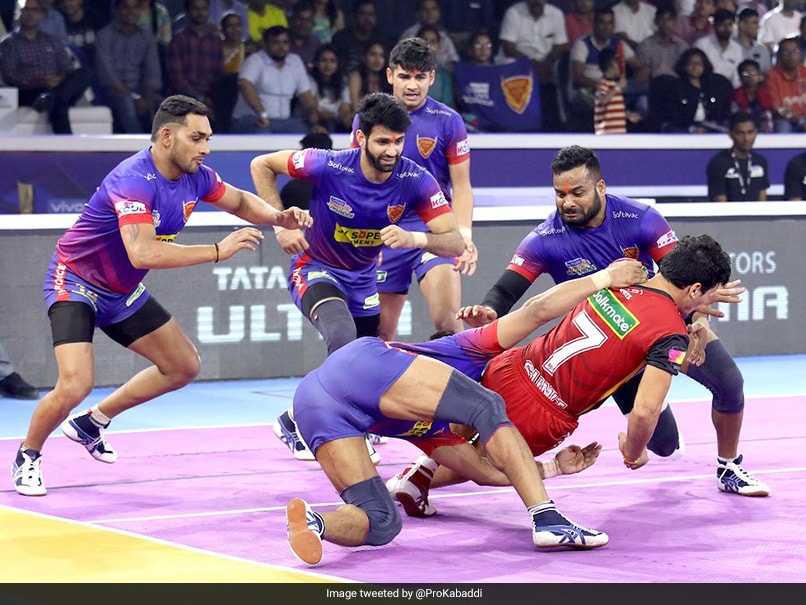 Pro Kabaddi League (PKL) season 7 got two new finalists for the summit clash on Wednesday. In the semifinal matches held at the EKA Arena by TransStadia in Ahmedabad, Dabang Delhi pipped defending champions Bengaluru Bulls 44-38 while Bengal Warriors sneaked in a nail-biting win 38-35 against U Mumba to enter the final for the first time in PKL history. Delhi and Bengal, who finished first and second respectively in the PKL points table after the league stage, lived up to the expectations as they played with all their hearts. The final will be played at the same venue on October 19.

Delhi's Neveen Kumar was the star performer for his side as he scored 15 points. Bengaluru's star raider Pawan Kumar Sehrawat top-scored in the match with 18 points but couldn't help his team cross the line.

Both Delhi and Bengaluru relied on their top raiders, Naveen and Pawan respectively, for the raid points.

Despite raiders doing the bulk of scoring for both the teams, the deciding factor in the match turned out to be the defenders.

Bengaluru's defenders looked in complete shambles as they managed only four tackle points, whereas Delhi's defence claimed a total of 15 points in the match.

The second semifinal between Bengal Warriors and U Mumba was a more intense affair as it went down to the wire, with both teams standing a chance to win the match till the very last raid.

However, Bengal players showed great composure in the dying minutes to keep U Mumba at bay.

A two-point raid by Sukesh for the Warriors in the 12th minute set the tone for Warriors who inflicted an All-Out with 5 minutes remaining to open a four-point lead. Bengal carried on the momentum and entered the half-time interval leading the match by six points.

Bengal made the mistake of slowing the pace of the match in the early minutes of the second half that allowed U Mumba to reduce the gap a little but Sukesh Hegde produced a stellar four-point Super Raid in the eighth minute to deflate U Mumba's confidence.

The Warriors pressed home the advantage to clinch another All-Out in the 10th minute of the half to open up a 10 point gap.

Despite Mumbai's best efforts, they could not bring down Bengal's lead as the match moved to the final minutes with Bengal well in control.

U Mumba went on to clinch an All-Out with 3 minutes remaining to make it a one-point game.

Sandeep Narwal's block with under two minutes remaining made it 35-35.

Arjun Deshwal failed in a Bonus Point attempt in his team's penultimate raid and the Warriors floored the raider in the final move of the game to clinch the match.