Pro Kabaddi 2019: Bengaluru Bulls will take on table-toppers Dabang Delhi in Semifinal 1 while U Mumba will face Bengal Warriors in Semifinal 2. 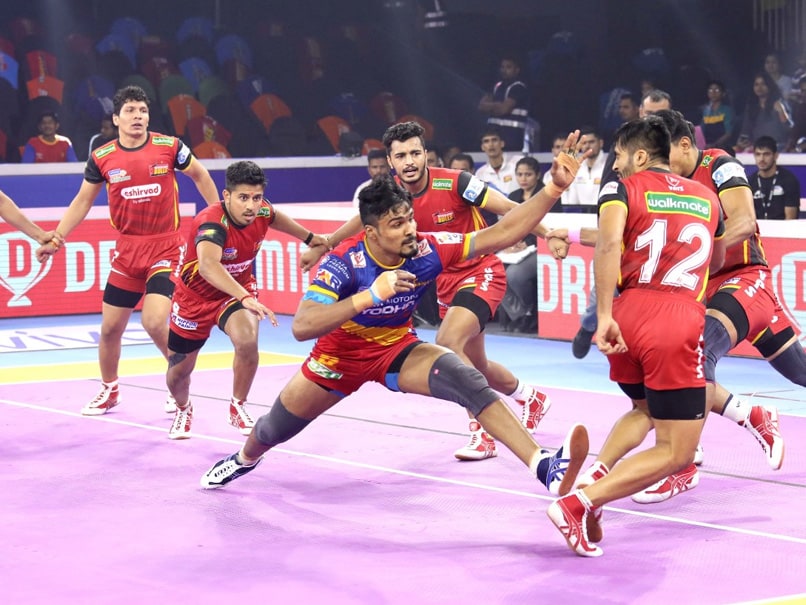 Defending champions Bengaluru Bulls on Monday advanced to the semifinals of Pro Kabaddi League (PKL) season 7 after they edged past UP Yoddha 48-45 in Eliminator 1 at the EKA Arena by TransStadia, Ahmedabad. In the Eliminator 2, U Mumba registered a convincing  46-38 win over Haryana Steelers to secure a spot in the semifinals. Bengaluru Bulls will take on table-toppers Dabang Delhi in Semifinal 1 while U Mumba will face Bengal Warriors in Semifinal 2. Bengaluru Bulls, the team which made it to the playoffs with the least number of points, ended the journey of UP Yoddha who had entered the knockout stage as the third-best team.

Bengaluru's win was even more significant as they had lost both the matches against UP Yoddha in the league stage.

Begaluru's star raider Pawan Kumar Sehrawat once again rose to the occasion and scored 20 points in the match.

Rishank Devadiga was the best performer for UP Yoddha with 11 points. Out of 11 points, he accumulated five of those via bonus.

In the first half, UP players started aggressively and inflicted an All-Out in the seventh minute of the game to open up a nine-point lead at 13-4.

After that, Bengaluru's Pawan Sehrawat started his side's comeback with a super raid.

However, UP once again restored their nine-point lead thanks to a super tackle from their skipper Nitesh Kumar. Going into the half-time interval, UP had three point lead.

UP Yoddha continued to maintain their lead in the second half as well. In fact, at one stage the scoreboard read 32-25 in their favour.

From thereon, things started to change as Bengaluru Bulls inflicted the second All-Out of the match on UP Yoddha, bringing down the gap to just one point.

Both the teams were inseparable at the full-time whistle as they had scored 36 points each. The match then went into the extra-time  post which Begaluru Bulls emerged as clear winners.

Unlike first match, U Mumba completely dominated the Eliminator 2 and never allowed Haryana Steelers to get too ahead in the game.

Both the teams started the match on an even note and gave each other tough competition. The match was well-balanced till the scoreboard reached 11-11 but after that it was a one-way traffic.

From there on, U Mumba maintained a healthy lead till the final whistle and never allowed Haryana Steelers to get back in the game.

Both the semifinals will be played at the same venue on October 16.