Pro Kabaddi: Monu Goyat, with 11 raid points, was the star for the UP side as they secured a place in thePro Kabaddi season seven playoffs. 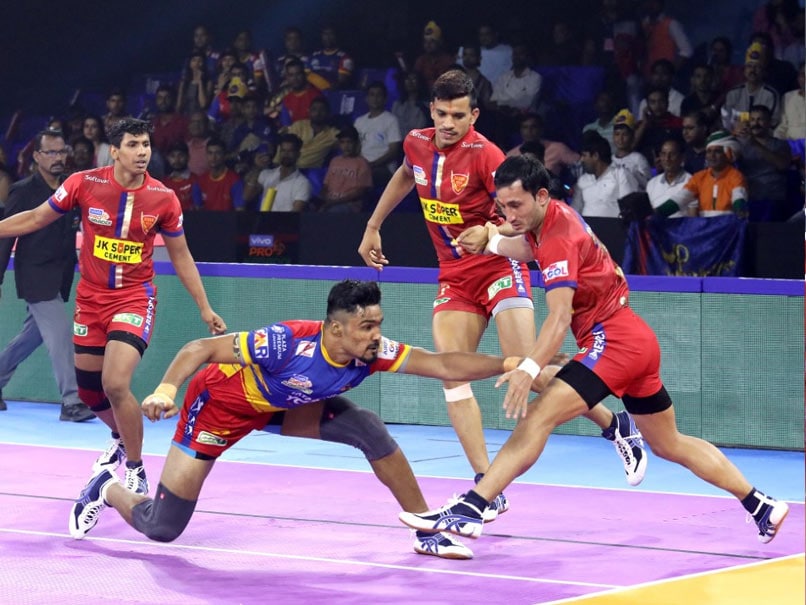 UP Yoddha thrashed Dabang Delhi by 17 points on Saturday.© PKL

UP Yoddha handed Dabang Delhi a 17-point (50-33) thrashing on Saturday. Monu Goyat, with 11 raid points, was the star for the UP side as they secured a place in the Pro Kabaddi season seven playoffs. In the other match, Patna Pirates edged past Gujarat Fortunegiants in a thrilling contest that ended at 39-33 in favour of Patna. The Delhi team with no Naveen Kumar, Ravinder Pahal and other experienced stars in the starting seven, offered very little resistance to a charged up UP team who were eyeing a victory to seal their playoff berth in front of their home crowd.

Monu Goyat picked up valuable raid points from the start and the UP side went on to secure their first All-Out in the sixth minute to move to a 5-point lead.

The story continued to be the same till the half time with Delhi's Meraj Sheykh the only bright light in what was otherwise a forgetful performance from the league's pace-setters.

The first half ended 22-12 with UP Yoddha clearly in control of the game.

Monu Goyat picked up a super 10 as UP Yoddha registered another all-out to extend their lead over Delhi.

Nitesh Kumar picked up a High 5 as Dabang Delhi conceded another all-out to give UP Yoddha a 17-point edge minutes before the final time.

In an otherwise forgetful outing for Delhi, Neeaj Narwal managed to get a super 10 to his name in the latter part.