IPL 2021, SRH vs CSK: MS Dhoni Finishes In Style vs SRH As CSK Sail Into Play-Offs

Chennai Super Kings produced a convincing performance against Sunrisers Hyderabad to maintain their remarkable consistency this season and sail into the Indian Premier League play-offs in Sharjah on Thursday. 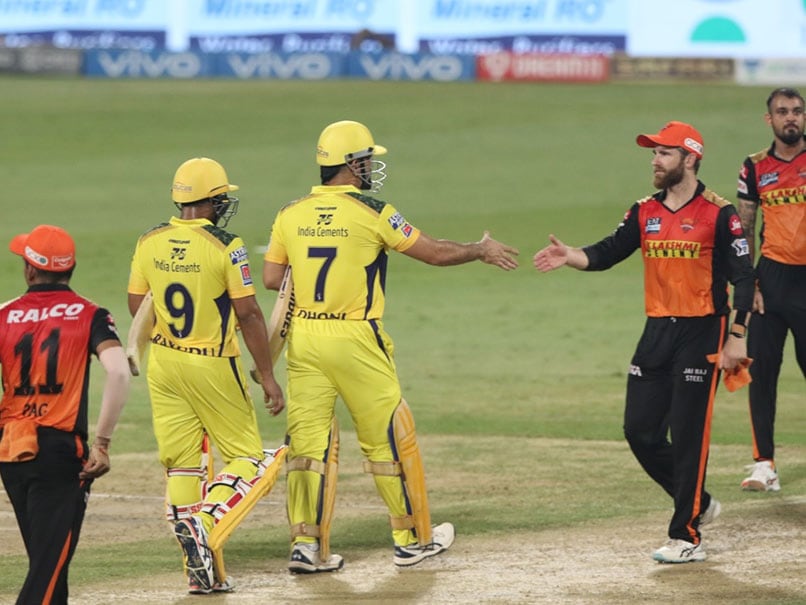 MS Dhoni and Ambati Rayudu put on 31 runs for the fifth wicket to seal the win for CSK.© BCCI/IPL

Chennai Super Kings produced a convincing performance against Sunrisers Hyderabad to maintain their remarkable consistency this season and sail into the Indian Premier League play-offs in Sharjah on Thursday. The bowlers, led by Josh Hazlewood (3/24) and Dwayne Bravo (2/17), restricted SRH to 134 for seven after MS Dhoni opted to bowl on a slow surface. Chasing the total, in-form openers Ruturaj Gaikwad (45 off 38) and Faf du Plessis (41 off 36) shared a sublime 75-run stand to give CSK an ideal start. A mini collapse in the middle overs made the chase interesting before CSK got the job done in 19.4 overs with Dhoni (14 not out off 11) hitting the winning six and bringing back memories of his heydays.

The three-time former champions thus ended the chase, scoring 139 for four, for a convincing six-wicket win.

With their fourth win in as many games since the tournament's resumption, CSK showed not making the play-offs last season was just a blip in their successful IPL history.

The Sharjah pitch, which produced high-scoring games last year, has been a complete contrast this season with its slow nature making stroke making difficult.

Batting in the second innings got easier with the fast-rising Gaikwad displaying supreme skills.

The confidence with which he played star SRH spinner Rashid Khan was most impressive. He charged down the track on Rashid's second ball and dispatched it for a straight six.

He also used his feet well against left-arm spinner Abhishek Sharma for another crisp boundary. Du Plessis too hit some cracking boundaries before falling to a tired shot.

From a commanding 103 for one, CSK slumped to 108 for four, making the dressing room slightly nervous. However, Ambati Rayudu (17 not off 13) avoided a tense finish for his team with a six and four off Bhuvneswar Kumar in the 19th over.

MS Dhoni remained unbeaten at the other end. Earlier, SRH innings never got the momentum it needed.

Wriddhiman Saha played some delightful shots in his 46-ball 44 but the majority of the SRH batsmen struggled to get going.

Saha's two sixes off Deepak Chahar in third over were the highlight of his innings. The first one was a hoick over midwicket and the second one was more like a lofted straight drive that cleared the ropes comfortably.

His opening partner Jason Roy fell cheaply, caught behind off Josh Hazlewood as he went for a wild slog. Skipper Kane Williamson struck two fours in his run-a-ball 11 before he was trapped in front by Dwayne Bravo with a full ball that swung away slightly to thud into the New Zealander's pads.

SRH were left reeling at 74 for four after a well-set Saha top-edged one off Ravindra Jadeja to be caught by Dhoni.

SRH, who reached 97 for four in 15 overs, badly needed a final flourish in the last five overs.

Abdul Samad (18 off 14) and Abhishek Sharma (18 off 13) hit a few sensational shots before Hazlewood removed them in the 17th over. CSK were brilliant in the death overs conceding only 37 runs.

Faf du Plessis Cricket Sunrisers Hyderabad vs Chennai Super Kings, Match 44 IPL 2021
Get the latest updates on IPL Auction 2023 and check out  IPL 2023 and Live Cricket Score. Like us on Facebook or follow us on Twitter for more sports updates. You can also download the NDTV Cricket app for Android or iOS.