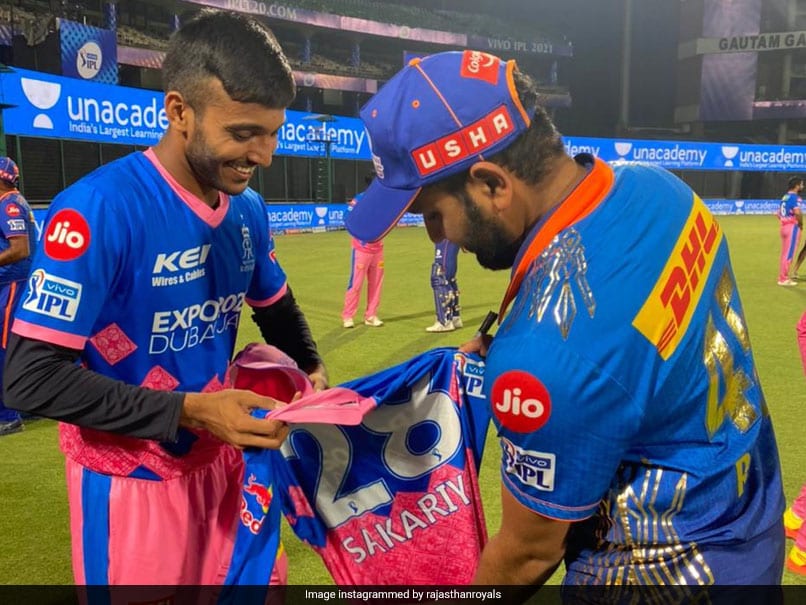 Mumbai Indians (MI) captain Rohit Sharma was an ace sportsman after the match against Rajasthan Royals (RR) as he was during the game. After Mumbai's seven-wicket win over RR on Thursday, Rohit signed a match jersey for young RR bowler Chetan Sakariya. RR captured the moment when the youngster met an IPL legend and captioned the pictures as: "Bowled to him like a rival, met him like a fan." This isn't the first time Rohit has obliged to a request from an opposition player for signing a match jersey. Earlier in the IPL season, Rohit signed Delhi Capitals fast bowler Avesh Khan's jersey after Mumbai's clash with Delhi.

Rohit's Mumbai cruised to the 172-run target set by RR with seven wickets in hand as Quinton de Kock finished 70 not out and Rahul Chahar returned 2 for 33 to finish as top performers with bat and ball respectively.

Sakariya, a left-arm pacer playing in his first IPL season, returned none for 18 from three overs.

With this win, Mumbai ended their two-match losing streak and they are now placed fourth on the Points Table with six points from six matches.

Rohit, one of Mumbai's lynchpins, did not have the best of outings as he finished 14 off 17 balls with a solitary six.

RR's season got from bad to worse with this defeat as they now find themselves seventh on the table with just four points from six matches.

Rohit Sharma Chetan Sakariya IPL 2021 Mumbai Indians vs Rajasthan Royals, Match 24 Cricket
Get the latest updates on ICC T20 Worldcup 2022, check out the Schedule and Live Score. Like us on Facebook or follow us on Twitter for more sports updates. You can also download the NDTV Cricket app for Android or iOS.