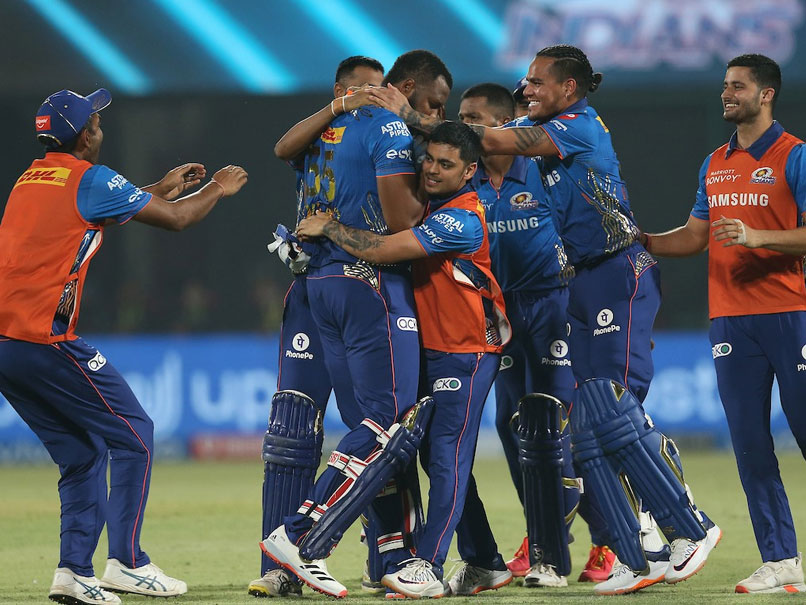 MI vs CSK: Kieron Pollard celebrates with teammates after their win in IPL 2021's Match 27.© BCCI/IPL

Batting like a man possessed, Kieron Pollard singlehandedly powered Mumbai Indians to an astonishing four-wicket win over Chennai Super Kings, belting the ongoing IPL's fastest half-century in a high-octane match, on Saturday. Set an imposing target of 219, Pollard raced to his fifty in only 17 balls and remained unbeaten on 87 off 34 deliveries, as he triumphantly walked back to his jubilant teammates at the end of the game. Mumbai needed 16 runs in the final over and Pollard smashed two fours and a six before running two off the last ball to seal the game for his side.

CSK rode on an unbeaten 72 off 27 balls by Ambati Rayudu to post 218/4, but it was overshadowed by Pollard's blitzkrieg, as he smashed eight sixes and six fours to build on a strong 71-run opening stand. This was the second-highest run-chase in IPL history.

At one stage, Mumbai were teetering at 81/3, but Pollard turned the tables with his power-hitting at the Arun Jaitley Stadium's batting paradise. Krunal Pandya (32) and Hardik Pandya (16) too played their part.

The carnage started when Pollard smashed three towering sixes off Ravindra Jadeja in the 13th over, which fetched Mumbai 20 runs. Next, he smashed two successive sixes off Lungi Ngidi and then took on Shardul Thakur in the 15th over, as Mumbai got 23. Despite Krunal's departure, Pollard, who got a life on 68, kept playing his shots as the equation came down to 31 off the last two overs.

Mumbai openers Quinton De Kock (38; 4x4; 1x6) and Rohit Sharma (35; 4x4; 1x6) started on an aggressive note as they raced to 58 in six overs. Rohit was hitting boundaries at will. The Mumbaikar hit Lungi Ngidi for a six over mid-wicket in the sixth over, while De Kock too played his shots. The duo plundered runs at will as the five-time champions looked on course for a successful chase.

However, Shardul Thakur broke the stand by dismissing Rohit, who holed in the deep to Ruturaj Gaikwad. Suryakumar Yadav (3) fell cheaply and Moeen Ali then removed De Kock as Mumbai slipped to 81/3 in the 10th over. Pollard took over from there.

Earlier, with Rayudu in full flow, CSK amassed 82 runs in the last five overs to set a stiff target. Moeen Ali (58) and Faf du Plessis (50), too, struck blistering half-centuries after being asked to bat first. CSK lost opener Ruturaj Gaikwad (4) early but South African du Plessis and England's Moeen plundered runs at will during their 108-run second-wicket partnership. Rayudu, who notched up his fifty in just 20 balls, went hammer and tongs with seven sixes and four fours during his stay in the middle.

To start with, du Plessis smashed Dhawal Kulkarni for a four and maximum, as CSK grabbed 11 runs in the second over. Moeen also opened up his arms in the third over, hammering Trent Boult (1/42) for a maximum over backward square-leg and a boundary, as Chennai fetched 12 runs off it.

Moeen was the more aggressive of the two as CSK cantered to 49/1 after powerplay. The southpaw kept playing his shots at will. Moeen, who used the pull shot to perfection and du Plessis, were brutal on leg-spinner Rahul Chahar (0/32), striking a six each in the ninth over, as CSK amassed 16 runs and raced to 77/1.

There was no stopping Moeen, who then smashed a six and two boundaries off James Neesham (0/26) in the 10th over, while Du Plessis hit two successive sixes and a boundary off Jasprit Bumrah (1/56) in the next. This was Bumrah's most expensive spell in the IPL.

Mumbai pegged back CSK by taking three quick wickets -- first Bumrah dismissed Moeen in the 11th over and then Kieron Pollard removed du Plessis and Suresh Raina (2) in successive balls in the 12th over, as CSK slipped to 116/4.

Then the show belonged to Rayudu, who, along with Ravindra Jadeja (22 not out), added 102 runs for an unbroken fifth wicket. CSK scored 92 runs in the last six overs.

Ambati Rayudu IPL 2021 Mumbai Indians vs Chennai Super Kings, Match 27 Cricket
Get the latest updates on SA vs IND 2021-22, check out the Schedule and Live Score . Like us on Facebook or follow us on Twitter for more sports updates. You can also download the NDTV Cricket app for Android or iOS.