IPL 2021, Sunrisers Hyderabad vs Mumbai Indians Highlights: SRH were restricted to 193/8 in their 20 overs while chasing 236 runs for victory against Mumbai Indians at the Sheikh Zayed Stadium in Abu Dhabi. 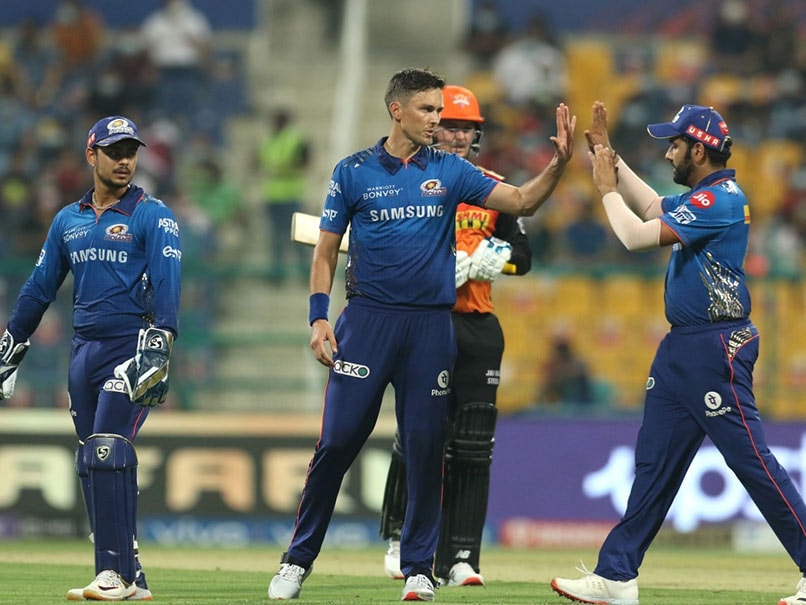 Mumbai Indians (MI) defeated SunRisers Hyderabad (SRH) by 42 runs at the Sheikh Zayed Stadium in Abu Dhabi in Match 55 of the ongoing Indian Premier League (IPL) 2021. SRH were restricted to 193/8 in their 20 overs as MI bowlers secured a comfortable victory. Manish Pandey remained unbeaten at 69 runs off 41 balls but failed to guide the team to a win. MI, still, failed to qualify for the play-off as they were left behind Kolkata Knight Riders on an inferior net run-rate basis. Earlier, batting first, MI's Ishan Kishan blasted his way to a superb a half-century in just 16 balls, fastest of IPL 2021. MI rode on Kishan's 84 runs off just 32 balls as MI marched on in the middle-overs. However, Abhishek Sharma put a lid on the scoring when he dismissed Kieron Pollard and Jimmy Neesham in back-to-back deliveries in the 13th over. Suryakumar Yadav ended brilliantly as he scored 82 runs in just 40 balls to help MI go past the 230-run mark. Earlier, Rohit made two changes, bringing in Piyush Chawla and Krunal Pandya in place of Saurabh Tiwary and Jayant Yadav while SRH brought in Manish Pandey and Mohammad Nabi into their side replacing Kane Williamson and Bhuvneshwar Kumar. Despite Kolkata Knight Riders' (KKR) emphatic victory against Rajasthan Royals (RR) yesterday. (Scorecard)

Kane Williamson IPL 2021 Cricket Sunrisers Hyderabad vs Mumbai Indians, Match 55 Live Score Live Cricket Score Live Blogs
Get the latest updates on IND vs NZ 2021, check out the Schedule and Live Score . Like us on Facebook or follow us on Twitter for more sports updates. You can also download the NDTV Cricket app for Android or iOS.