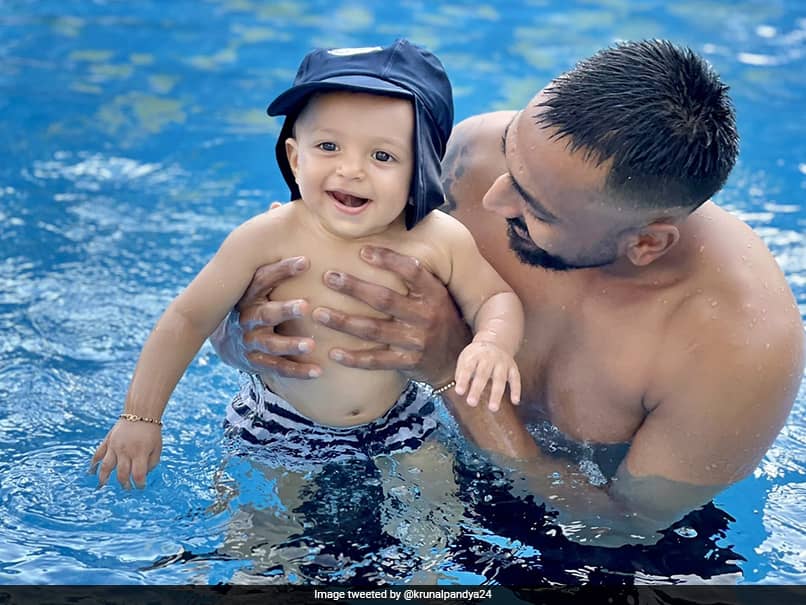 IPL 2021: Krunal Pandya with nephew Agastya at the pool.© Twitter

The Pandya brothers are in gear for the Indian Premier League with the Mumbai Indians. The tournament got underway on Friday and players are busy in preparation amid the pressures of living in a bio-bubble. However, with the BCCI allowing families in the bubble, the players get much needed time with their loved ones, and MI all-rounder Krunal Pandya had some down-time by the pool with his brother Hardik's son, Agastya. Sharing a series of pictures with his nephew, Krunal put up a hilarious caption.

"Guess whose team he's in when we have to laugh at Daddy Pandya," Krunal wrote, tagging his brother.

Guess whose team he's in when we have to laugh at Daddy Pandya @hardikpandya7 pic.twitter.com/xCbczIz2rX

Hardik and his partner Natasa Stankovic were blessed with Agastya in July last year.

Mumbai Indians got their title defence off to a start on Friday against Royal Challengers Bangalore, but were beaten narrowly in a last-ball thriller.

A 35-ball 49 from Chris Lynn and some handy knocks from Suryakumar Yadav and Ishan Kishan helped MI score 159 at the MA Chidambaram Stadium in Chennai.

Harshal Patel starred for RCB with the ball, picking up the first five-wicket haul of the season.

Krunal Pandya then gave MI their first breakthrough, taking the wicket of Washington Sundar, who was pushed up to open.

RCB lost another wicket soon as Boult had debutant Rajat Patidar chop the ball on to the stumps.

But then RCB captain Virat Kohli and Glenn Maxwell put on a 52-run partnership to put them in control.

Kohli and Maxwell both fell in quick succession, and MI looked to be back in the game, but AB de Villiers managed to take RCB home with a 27-ball 48.

MI will next take on Kolkata Knight Riders at the same venue on Tuesday.