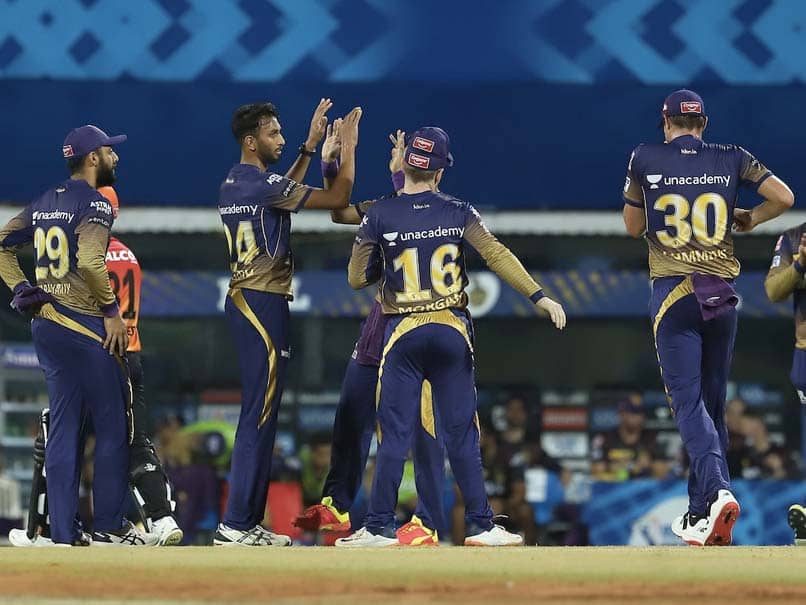 Kolkata Knight Riders (KKR) defeated SunRisers Hyderabad (SRH) by 10 runs in their Indian Premier League (IPL) 2021 campaign opener at the MA Chidambaram Stadium in Chennai on Sunday. With the win, KKR are tied with Delhi Capitals and Royal Challengers Bangalore (RCB) at two points each. Delhi Capitals lead the points table thanks to a superior net run-rate after their commanding win over MS Dhoni-led Chennai Super Kings. On Monday, Rajasthan Royals will take on Punjab Kings and the winner of that match will join Delhi, KKR and RCB in the top four list on the IPL 2021 points table.

The win over SRH, took KKR to second spot in the points table. They have a better run-rate than third-placed Royal Challengers Bangalore, who won on the last ball but an inferior one to table-toppers Delhi Capitals, who outclassed CSK in their opening match.

Currently, are bottom of the pack while SRH are seventh and Mumbai Indians sixth. Rajasthan Royals and Punjab Kings clash on Monday after which all teams would have played a match each.

There have been only three games so far in the ongoing edition of the IPL but the race for the Orange Cap is already heating up.

Shikhar Dhawan, who scored a sublime half-century against CSK, leads the scorers' chart with 85 runs.

Nitish Rana, who played a crucial knock of 80 against SRH on Sunday, is second on the list. Behind him is Delhi Capitals' Prithvi Shaw and the SRH duo of Manish Pandey and Jonny Bairstow.

RCB's Harshal Patel, who produced a match-winning spell of 5 for 27, leads the way as the highest wicket-taker in the tournament so far.

There is an eight-way tie for the second spot as Avesh Khan, Rashid Khan, Chris Woakes, Jasprit Bumrah, Marco Jansen, Mohammad Nabi, Prasidh Krishna and Shardul Thakur have all picked up two wickets each.

Shikhar Dhawan IPL 2021 Cricket Sunrisers Hyderabad vs Kolkata Knight Riders, Match 3 IPL Points Table 2021
Get the latest updates on IPL 2021, IPL Points Table , IPL Schedule 2021 , live score . Like us on Facebook or follow us on Twitter for more sports updates. You can also download the NDTV Cricket app for Android or iOS.