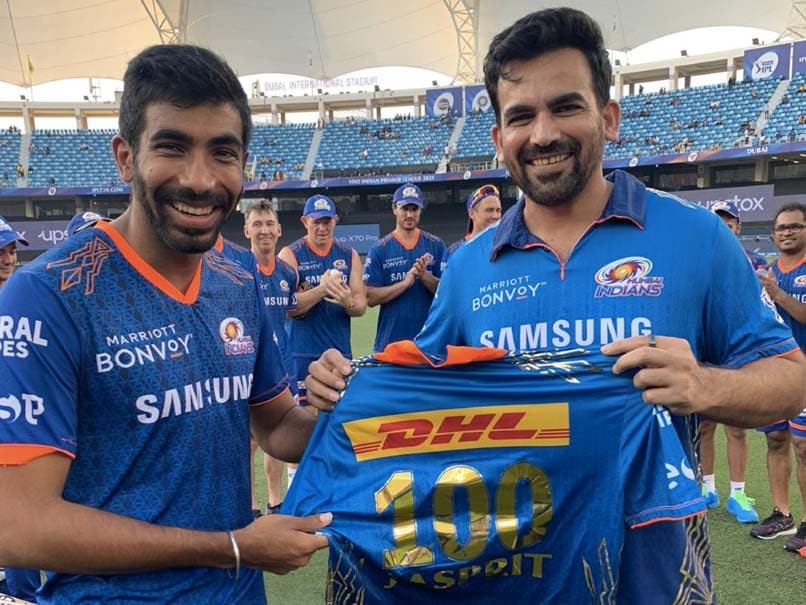 IPL 2021: Jasprit Bumrah poses for a photo with Zaheer Khan ahead of Match 30.© Mumbai Indians

Jasprit Bumrah on Sunday joined an elite list of players to have donned the Mumbai Indians jersey. Bumrah walked out at the Dubai International Stadium to play his 100th IPL match as the 2021 season resumed in the UAE with a clash between MI and rivals Chennai Super Kings. Bumrah thus became just the sixth player to reach the milestone. The paceman was presented with a special jersey by Zaheer Khan, Director of Cricket Operations at MI, with the number 100 at the back.

Having joined Mumbai ahead of the 2013 season, the India international had taken 115 wickets in 99 matches for MI ahead of the clash against CSK. MI took to social media to hail their star bowler and posted a photo of him holding the jersey given by Zaheer:

In the ongoing season which began in April this year, Bumrah wasn't in his best form. He managed to muster only six wickets in seven games, before the tournament was postponed midway due to a rise in COVID-19 cases in the bio-secure bubbles.

With the competition resuming in UAE, Bumrah will be hoping to put in some good displays for the defending champions and help them qualify for the playoffs.

The Mumbai franchise are without regular skipper Rohit Sharma for Match 30, with Kieron Pollard leading the side in his place.

Jasprit Bumrah Zaheer Khan IPL 2021 Chennai Super Kings vs Mumbai Indians, Match 30 Cricket
Get the latest updates on India vs Australia and check out  Schedule, Results and Live Score. Like us on Facebook or follow us on Twitter for more sports updates. You can also download the NDTV Cricket app for Android or iOS.