IPL 2021: Hardik Pandya and Rohit Sharma were both absent as Mumbai Indians lost to Chennai Super Kings in the opening match of the UAE leg on Sunday. 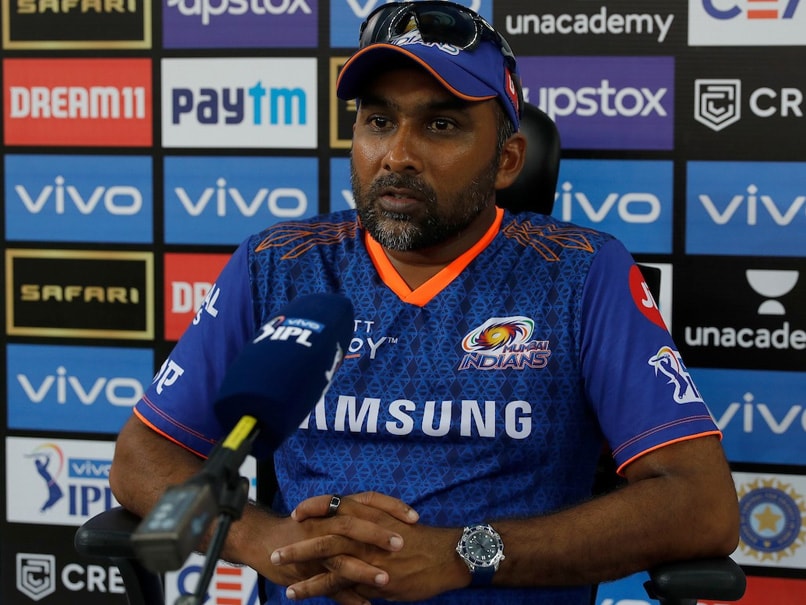 Mahela Jayawardene said Hardik Pandya was kept out of the clash vs CSK by a "little niggle".© BCCI/IPL

Star all-rounder Hardik Pandya was kept out of the IPL 2021 game against Chennai Super Kings as a precautionary measure due to a "little niggle", Mumbai Indians head coach Mahela Jayawardene revealed. "Hardik was training, had a little niggle, so again precaution, we thought, lets just give him extra days to see how things are, but nothing serious," the former Sri Lankan skipper said during a virtual press conference. MI skipper Rohit Sharma too wasn't part of the MI playing XI on Sunday but Jayawardene said he should be available for the next match.

"Rohit was batting and doing his running as well, but after coming back from the UK, we felt that, he probably needed an extra few days, so should be fine to play the next game," said the former Sri Lankan captain.

Mumbai didn't have a good start to the resumption of IPL 2021 as they lost the opening match by 20 runs and Jayawardene lamented that none of his batters took the responsibility to bat through the innings.

Ruturaj Gaikwad hit an unbeaten 88 while Dwayne Bravo, batting at number eight, smashed 23 off just 8 balls as CSK made 156 for six after opting to bat first.

The total proved to be more than enough as CSK restricted MI to 136 for 8.

"We probably gave couple of soft dismissals. It just needed someone to take a bit more responsibility and bat through the innings, which we did not do and that was a difference with Ruturaj (Gaikwad) doing that for CSK," Jayawardene said.

"So, even though they (CSK) lost wickets, there was a set batsman, who went till the end. So, I think we''re disappointed, the way we handled the situation, the game awareness and the approach."

Chasing 156, MI slipped to 37 for three in the sixth over, before further slumping to 58 for four in the 10th over. Saurabh Tiwary (50 not out) was the top-scorer for MI but he didn't get enough support.

"...probably needed a bit more application of taking that responsibility and giving yourself a bit of time because we felt that the second half of each innings was much easier to bat," Jayawardene said.

"So, I put it down to game awareness and taking that kind of onuses, but not too concerned, because the guys (have) been hitting the ball pretty well, it is just the application out there in the middle, that is something we need to work on."

"We knew we need to be sharper, especially against the experienced Chennai team. But I think we probably competed that first 10 overs and probably another five overs in between in a 40-over game.

"So, I think when you're playing an opposition like Chennai, if you're not in the competition for that many overs, it's always going to be tough," he said.

Mahela Jayawardene Cricket
Get the latest updates on ICC Women's Cricket World Cup 2022 and IPL 2022, check out the Schedule , Live Score and IPL Points Table. Like us on Facebook or follow us on Twitter for more sports updates. You can also download the NDTV Cricket app for Android or iOS.