IPL 2021: Delhi Capitals chased down 197 with six wickets and more than an over to spare as they beat Punjab Kings on Sunday. 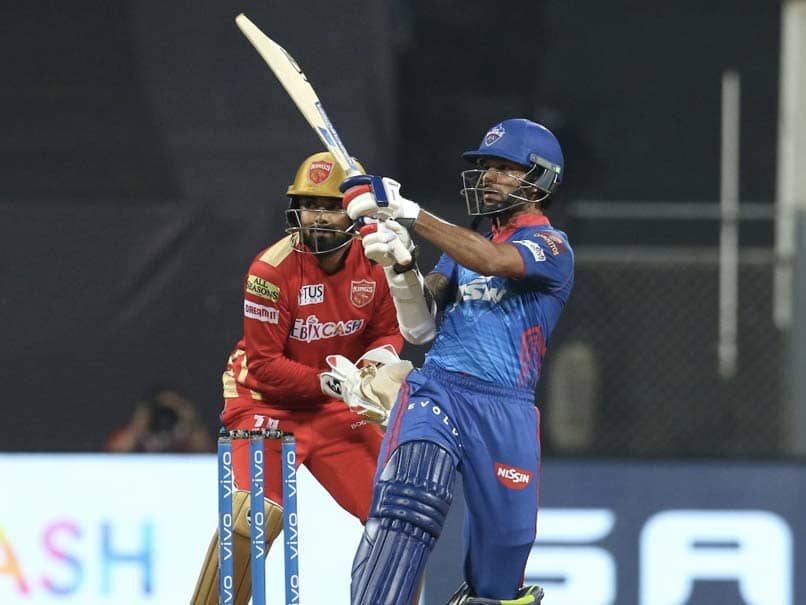 Shikhar Dhawan struck a swashbuckling 92 as Delhi Capitals made short work of a 196-run target for a six-wicket win over Punjab Kings in the IPL at Mumbai's Wankhede stadium on Sunday. Dhawan looked in sublime form during his 49-ball knock that was studded with 13 fours and two sixes. Dhawan was ably supported by Prithvi Shaw (32 off 15) first up and then skipper Rishabh Pant (15) and Marcus Stoinis (27 not out) as DC chased down 196 in 18.2 overs.

Put in to bat, Mayank Agarwal and captain KL Rahul stitched a century-run opening stand to guide Punjab to a challenging 195 for four.

Agarwal made 69 off 36 balls, while Rahul scored 61 off 51 deliveries as Punjab made a flying start to their innings.

Chasing 196, Dhawan and Shaw made a quick start, sharing 59 runs in just 33 balls for the opening wicket.

Shaw continued his fine form and smashed a 17-ball 32 before being holed out to Chris Gayle off Arshdeep Singh.

Steve Smith, playing his first match for DC, looked a pale shadow of himself before becoming Riley Meredith's first victim of the day.

But the wickets hardly had any impact on Dhawan, who continued his attacking strokeplay to bring up his fifty off 31 balls.

Dhawan hit Meredith for a hat-trick of fours, besides the bowler gave away another boundary off a wide ball as DC brought down the margin to 53 off 36 balls.

Dhawan, however, fell eight short of a brilliant century when he was cleaned up by Jhye Richardson (2/41) in the 16th over.

Earlier, Pant's decision to bowl after winning the toss backfired as the opening duo of Agarwal and Rahul took the attack to the opposition bowlers from the onset, hitting boundaries and sixes at will.

While Agarwal was the aggressor of the two initially, Rahul upped the ante after a relatively sedate start.

Agarwal and Rahul adopted an aggressive approach against debutant Lukman Meriwala and Kagiso Rabada, taking their team to 94 for no loss in 10 overs.

Agarwal was looking dangerous during his 36-ball knock and ended up hitting seven boundaries and four hits over the fence.

But DC dismissed both the batsmen in quick succession to make a comeback into the match. While Agarwal was the first to depart, slicing a Meriwala delivery straight to Shikhar Dhawan at sweeper cover in the 13th over, Rahul handed a simple catch to Marcus Stonis at midwicket off Rabada.

Rahul's knock was laced with seven boundaries and two sixes.

Big-hitting Chris Gayle (11) failed to make a mark, perishing soon in search of a maximum.

Nicholas Pooran (9) failed yet again but Deepak Hooda (22 not out off 13) and Shahrukh Khan (15 not out off five) provided the much needed big hits towards the end.