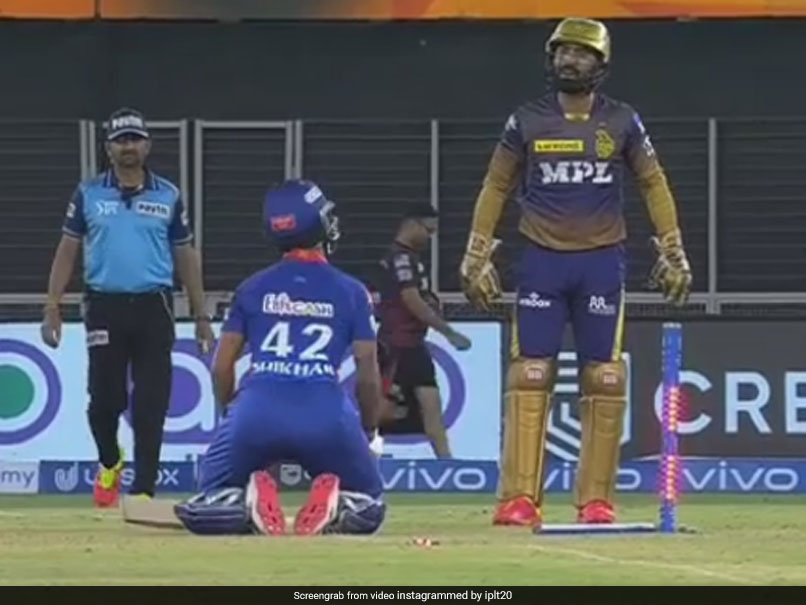 DC vs KKR: Shikhar Dhawan fell to his knees during an exchange with Dinesh Karthik.© Instagram

With Shikhar Dhawan around, entertainment is never far away. And so it proved to be during Delhi Capitals' Indian Premier League (IPL) 2021 match against Kolkata Knight Riders on Thursday. Delhi Capitals chased 155 in 16.3 overs to win the game, but the two provided a light moment during DC's innings. After a stumping chance, Karthik appeared to angrily point out at Dhawan and the left-hander immediately dropped his bat and fell to his knees. Karthik made another angry gesture before breaking into a smile.

Earlier, Axar Patel and Lalit Yadav took two wickets each as Kolkata Knight Riders were restricted to 154/6. Shubman Gill scored 43 to anchor their innings, and then, despite a mini-collapse in the middle, Andre Russell smashed an unbeaten 45 off 27 deliveries to take KKR to a respectable total.

Dhawan's opening partner Prithvi Shaw then got DC off to the perfect start, smashing six fours in the very first over of their chase.

The openers put on 132 for the first wicket to finish KKR's hopes of defending the modest total.

Dhawan was trapped LBW for 46 off 47 by Pat Cummins, but Shaw kept going.

Cummins, however, ended Shaw's knock and then also dismissed Rishabh Pant in the same over. However, it was too little, too late for KKR as they slumped to a 7-wicket defeat.

Dinesh Karthik Cricket
Get the latest updates on SA vs IND 2021-22, check out the Schedule and Live Score . Like us on Facebook or follow us on Twitter for more sports updates. You can also download the NDTV Cricket app for Android or iOS.