Royal Challengers Bangalore (RCB) spinner Washington Sundar believes that the pitches in the UAE will offer plenty of assistance to spinners in the upcoming IPL 2020. 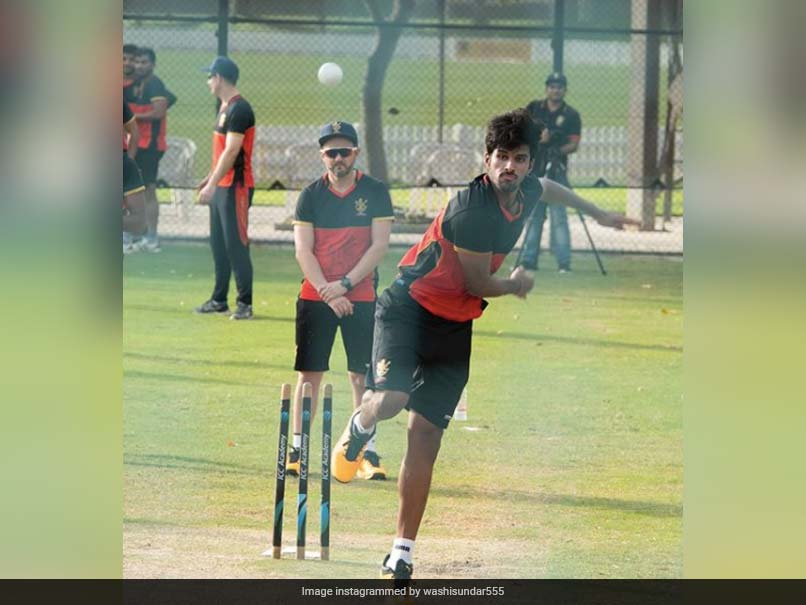 Washington Sundar expects the pitches in the UAE to assist spinners during IPL 2020.© Instagram

Royal Challengers Bangalore (RCB) spinner Washington Sundar believes that the pitches in the UAE will offer plenty of assistance to spinners in the upcoming Indian Premier League (IPL) 2020. Sundar also said that all the training wickets have been on the slower side, so spinners can expect to have a field day when the tournament starts. The IPL 2020 is scheduled to be played from September 19 - November 10 across three venues (Dubai, Abu Dhabi, Sharjah) in the UAE.

"I think things are going very well and we have been getting pitches where we can get some assistance for spinners. We can expect this in the games as well when the tournament starts. With the amount of heat that has been here for the last few days, we can definitely see plenty of assistance for the spinners in the middle of the tournament," Sundar said in a video posted on the official Twitter handle of RCB.

RCB spinners Shahbaz Ahmed and Yuzvendra Chahaltalked about the importance of communicating with the skipper. The duo said that Virat Kohli is always there to provide clarity regarding what line and length to bowl on a particular wicket.

"The wickets are slow here, the ball is not coming on to the bat, I have been discussing this with Virat Bhai as to what line and length I can bowl on these wickets. I am equally focused on my batting and bowling," Shahbaz Ahmed said.

"Whenever I go to Virat Bhai, he tells me to always bowl my best balls, Virat Bhai told me to bowl a little quicker as these wickets are really slow," said Chahal.

RCB has managed to reach the finals of the tournament on three occasions, but the coveted trophy still eludes them.

On Saturday, the Board of Control for Cricket in India (BCCI) confirmed that 13 personnel including two players tested positive for COVID-19. However, the board did not specify as to which team has how many confirmed cases. The identity of the players and staff was also not revealed.

Royal Challengers Bangalore Cricket IPL 2020
Get the latest updates on India vs South Africa and check out  Schedule, Results and Live Score. Like us on Facebook or follow us on Twitter for more sports updates. You can also download the NDTV Cricket app for Android or iOS.