RR vs MI: Jofra Archer pulled off a screamer near the ropes that ended Ishan Kishan's innings on Sunday. 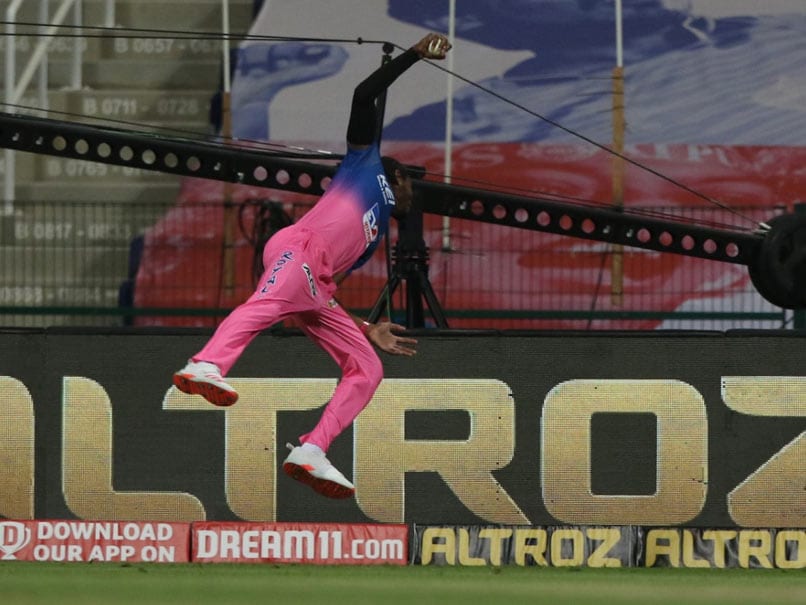 RR vs MI: Jofra Archer's athleticism near the boundary ropes left his teammates in disbelief.© BCCI/IPL

Jofra Archer pulled off an amazing one-handed blinder, stationed at third man fence, to send back Ishan Kishan for 37. In the 11th over, Kartik Tyagi bowled a short delivery and Ishan Kishan went for a cut, got a top edge and the ball was going straight to Archer but the Englishman misjudged it initially but recovered just in time to pull off one of the best catches of this year's IPL. Archer's athleticism in the deep left his teammates Riyan Parag and Kartik Tyagi in total disbelief.

In the match, Mumbai Indians' stand-in skipper Kieron Pollard won the toss and opted to bat.

His decision seemed to backfire in the very first over of the match as Archer cleaned up the in-form Quinton de Kock after being hit for a six.

Suryakumar Yadav then joined Ishan Kishan in the middle to steady the innings for Mumbai. They put on 83 runs for the second wicket.

Kieron Pollard hit a six off Shreyas Gopal but the leg spinner cleaned him up with a googly on the very next ball.

Saurabh Tiwary played a cameo of 35 before being dismissed by Jofra Archer.

It was the Hardik Pandyashow towards the backend of Mumbai's innings as he tore into Ankit Rajpoot in the 18th over and then finished the innings with another big over.

The all-rounder reached his half-century off just 20 deliveries with a six over covers off Kartik Tyagi in the final over.

Hardik finished the innings with a straight hit down the ground that helped Mumbai post an imposing total of 195 for five.

Hardik Pandya Riyan Parag IPL 2020 Rajasthan Royals vs Mumbai Indians, Match 45 Cricket
Get the latest updates on IPL Auction 2023 and check out  IPL 2023 and Live Cricket Score. Like us on Facebook or follow us on Twitter for more sports updates. You can also download the NDTV Cricket app for Android or iOS.