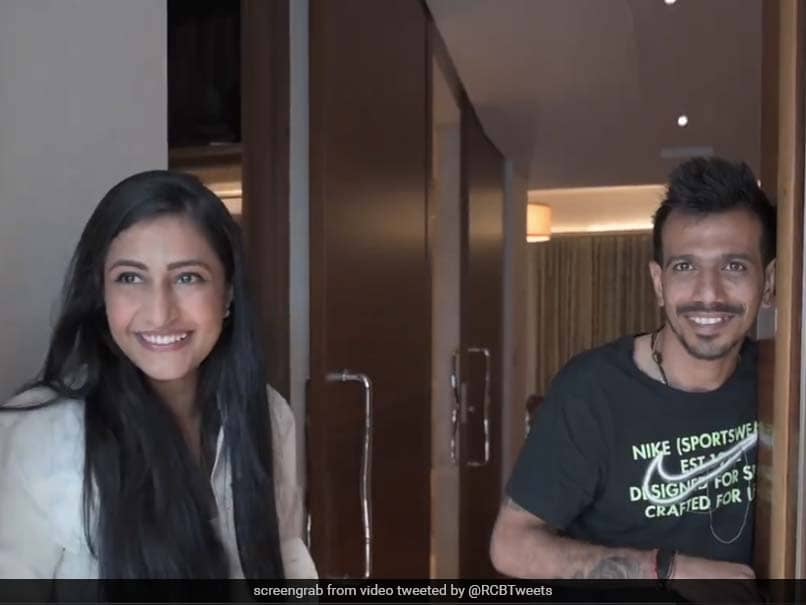 Yuzvendra Chahal's fiancee Dhanashree Verma gave the Royal Challengers Bangalore (RCB) leg-spinner a wonderful surprise before their IPL 2020 league game against Rajasthan Royals on October 17. Dhanashree landed in the United Arab Emirates on October 11 but the mandatory quarantine had kept her apart from Chahal. RCB's official Twitter handle shared a video with a caption, "Yuzi's biggest reason to smile" capturing Chahal's reaction upon finding his soon-to-be wife knocking on his hotel room door. "Bold Diaries: Yuzi's biggest reason to smile. The happier @yuzi_chahal is off the field, the more lethal he is on the field. And there's a new reason behind his happiness of late, and that's Dhanashree Verma. These two are," RCB captioned the video.

The happier @yuzi_chahal is off the field, the more lethal he is on the field. And there's a new reason behind his happiness of late, and that's Dhanashree Verma. These two are #PlayBold #IPL2020 #WeAreChallengers #Dream11IPL pic.twitter.com/Y262gh9874

Dhanashree explains that she was supposed to meet him after the match against RR but decided to surprise him before the game.

In the video, the Indian leg-spinner jokes how he has already started missing his freedom. Chahal then adds that it was the first time someone knocked at his door in a long while.

With his fiancee in the stands for the first time since their engagement, Chahal picked up two important wickets and conceded 34 runs in his four overs against Rajasthan Royals.

RCB went on to win the match, thanks to an AB de Villiers masterclass who turned the match on its head, smashing 55 not out off just 22 balls.

After a close game against RR, RCB put on a complete performance against Kolkata Knight Riders, thrashing the two-time champions by eight wickets. Chahar gave away just 15 runs off his four overs and accounted for two dismissals, taking his wickets tally to 15 from 10 games.

The Virat Kohli-led side have been in terrific form this season and have the same number of points as table-toppers Delhi Capitals but are on second position with an inferior net run-rate.

After a disappointing last season where they finished last, RCB have bounced back strongly winning seven out of 10 games and are on course to qualify for the play-offs. They will next play bottom-placed Chennai Super Kings on October 25.

Yuzvendra Chahal IPL 2020 Cricket
Get the latest updates on India vs Australia Series, check out the India vs Australia Schedule for 2020-21 and Ind vs Aus live score . Like us on Facebook or follow us on Twitter for more sports updates. You can also download the NDTV Cricket app for Android or iOS.